Notice to Aboriginal and Torres Strait Islander people:  This article contains the names of people that have died.

In the previous post, I discussed Arrernte oral traditions relating to the Henbury crater field in the Central Desert. As I said, Henbury is not the only impact crater in Arrernte country with an associated Dreaming. Let us now travel 175 km west of Alice Springs, where we find a 5 km-wide ring-shaped mountain range that stands 150 metres above the desert, representing the remnant central uplift of an eroded 22 km-wide complex crater (Figure 1). The scientific explanation is that this structure formed from a comet impact some 142.5±0.8 million years ago. The ground has eroded down nearly 2 km from its original level. Differential erosion lead to the ring shaped mountain range we see today. Rocks from within the crater feature prominent shatter cones - a geological feature only created in large cosmic impacts. The site was confirmed as a giant crater in the 1960s.

The name colonists gave the site is "Gosses Bluff" but the Western Arrente call this place Tnorala and consider it sacred. Arrernte Elder Mavis Malbunka (Figure 2), wife of Herman Malbunka, the Traditional Custodian of Tnorala from Ntaria (Hermannsburg), explains the origin of Tnorala in Arrernte traditions: 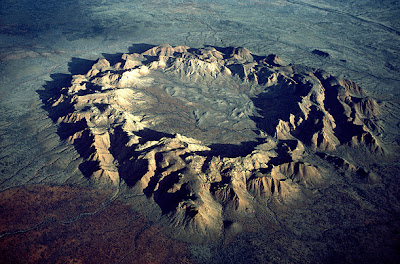 In the Dreaming, a group of sky-women danced as stars in the Milky Way.  One of the women, who was carrying a baby, placed her baby in a wooden basket (coolamon). As the women continued dancing, the coolamon fell and the baby plunged into the earth. The baby struck the ground and was covered by the coolamon, the force of which drove the rocks upward, forming the circular mountain range we see today. The baby's mother, the evening star, and father, the morning star, continue to search for their baby to this day. 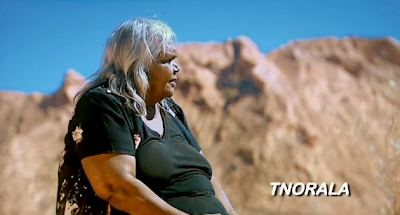 She continues:  "We tell the children don't look at the evening star or the morning star, they will make you sick because these two stars are still looking for their little baby that they lost during the dance up there in the sky, the way our women are still dancing.  That coolamon, the one the baby fell out of, is still there. It shows up every winter."

The coolamon (Figure 3) is formed by the stars in the constellation Corona Australis ("Southern Crown"), which looks similar in shape to a coolamon. It is seen in the region bordering the constellations of Sagittarius and Scorpius and is prominent in the winter night skies, resembling a coolamon falling from the Milky Way (see Figure 4).

Figure 3:  A coolamon from Central Australia.
Image from www.tribalworks.com.

Mavis warns: "Be careful at night. These two stars are looking for their child, Tnorala." Still today, that evening star comes at night with big lights. The white man call it Min Min light, but we know it as the bright light of the mother looking for her child”.

The famous Min-Min lights, which are an unexplained atmospheric phenomenon or probably an optical illusion, are frequently reputed to be the baby’s parents. "We were chased by a bright light, and the old man, my husband, realised what it was and said that it's from the Dreamtime and it's still looking for the child. The mother must have thought that she had found her little child. Then we saw the star go up to the heavens”.  Although they are identified as the “morning star” and “evening star”, they are not explicitly identified as Venus.  Mavis notes “that was the last we saw of it, but with this big summer, we might get to see the two stars again. They don't show themselves all the time. No! Only every now and then.”

Recently, Tnorala featured on the National Geographic Channel documentary "The Story of God with Morgan Freeman" (Episode 4: Creation). I joined traditional custodian, country music singer, and Arrernte man Warren H. Williams to learn more about the site. He says that shooting stars are family members searching for the lost child.


Part 3 (Kandimalal: Wolfe Creek Crater) will be the topic of a future post by John Goldsmith, who recently visited Wolfe Creek and collected stories from Indigenous elders.  We'll give John a little time to collate his findings first.

We respectfully acknowledge the Arrernte people and the caretakers of the Tnorala story,
Herman and Mavis Malbunka.

NOTE: This was updated on 10 September 2012 to correct the identity of the celestial turna.
- Duane Hamacher
Posted by Indigenous Astronomy Blog at 2:26 PM