By Duane Hamacher
----
Notice to Aboriginal and Torres Strait Islander people
This article contains information from the book "Nomads of the Australian Desert" by Charles Mountford, which was banned from sale in the Northern Territory for revealing secret information of the Pitjantjatjarra.  This article contains no information about the Pitjantjatjarra from that book.
----
The day probably began like any other in the Central Desert of Australia some 4,200 years ago... the men hunted kangaroo in the desert plains while women collected seeds and roots.  Or perhaps families were gathered around a campfire while Elders recounted Dreaming stories to wide-eyed children.  Suddenly, a brilliant flash lit up the sky and a deafening roar reverberated across the desert.  An object a few tens-of-metres in diameter travelling at ~20 km per second (over 60 times faster than a bullet) broke apart in the atmosphere and struck the earth, excavating a dozen craters scattered over a square kilometre with an energy equivalent to several millions of tons of TNT and scattering iron meteorite fragments across the area (Figure 1).  The impact would have been felt across the region and would have caused grievous harm or death to anyone within several kilometres of the impact site.  So did anyone witness the impact? (perhaps someone far enough away to see it but not close enough for them to have been harmed).  The relatively young age of the crater-field combined with the fact that Aboriginal people have inhabited the area for tens-of-thousands of years suggests that, yes... they did.  But has the memory of the event survived into modern times?  Let's explore... 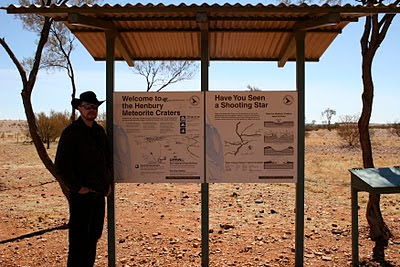 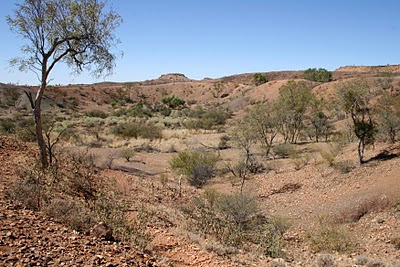 The first European to find the crater field was a manager of a nearby cattle station in 1899, which was run by a family from Henbury, England.  In 1932, A.R. Alderman published a paper identifying the structures as meteorite craters, which was named the Henbury Crater Field.  An excursion to the site with a local Aboriginal man revealed some interesting details about the crater field.  The man Alderman took with him explained that Aboriginal people would not camp within a couple miles of the site (which he called "Chindu chinna waru chingi yaku" which roughly translates to "Sun walk fire devil rock"), nor would they venture nearby or drink water that collected in the craters (see Figure 2) in fear that the "fire-devil" would fill them with iron.  The man explained that his paternal grandfather had seen the fire-devil and that it had come from the sun, suggesting a cosmic origin.

Figure 2: Rainwater that collected in one of the smaller craters.  Photo by David McKinnon.
Charles P. Mountford collected Dreaming stories from the Henbury craters in the mid-20th century, but their formation was instead attributed to a lizard-woman.  In the 1990s, oral traditions about the crater field were collected, but many are sacred and secret to outsiders.  The Arrernte people called the crater-field Tatyeye Kepmwere (Tatjakapara), and according to Parks & Wildlife of the Northern Territory, "some of the mythologies for the area are known but will only be used for interpretation purposes after agreement by the Aboriginal custodians of the site."
The account from the Aboriginal man who accompanied Alderman reveals that this site was long known as an unusual and significant place to the local Aboriginal people.  It also indicates that the memory of this event has survived for thousands of years in oral tradition.  However, Henbury is not the only impact crater in Arrernte country with associated Dreamings... but that is a story for our next post :-)
Posted by Indigenous Astronomy Blog at 11:52 AM