The Dhui Dhui (pronounced Doo-ee Doo-ee) Story appears courtesy of Russell Butler, of the Bandjin People.  The sea country belonging to the Bandjin (‘Saltwater’) people includes Hinchinbrook Island and Lucinda Point on the adjoining mainland of north Queensland, as well as Gould and Garden Islands and part of Dunk Island.

Long ago, two boys paddled out in a canoe south of Dunk Island (Coonangalbah) and dropped their stone anchor to fish.  The elders had warned them not to fish on that sand spit because there was a big dangerous shovelnose ray (Dhui Dhui) that lived there.  But the boys were defiant and fished there anyway.  As they fished, the ray bit their line and started to tow them around in the canoe, but the boys wouldn't let go of the line. It towed them around the ocean for a while before going down the Hinchinbrook channel. They disappeared into the horizon.  By then, it was getting dark and everyone was worried about the boys. As the people looked south after sunset, they saw the Southern Cross rising, which was Dhui Dhui (the shovelnose ray), followed by the two Pointer stars (the two boys in their canoe).

From far northern Queensland, you can see Dhui Dhui rising in the southeastern sky after sunset in early February.

Source.
Posted by Indigenous Astronomy Blog at 2:00 PM No comments: 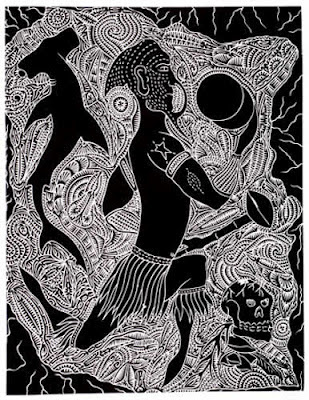 When Giant Fish Leaves the Sky

I would like to introduce our readers to a video presentation made by John Morieson and Alex Cherney about the astronomy of the Boorong clan (of the Wergaia language in northwest Victoria).

John Morieson is an historian in Victoria who has spent many years researching the astronomy of the Boorong and other Victorian Aboriginal groups.  He completed an MA thesis at the University of Melbourne in 1996, where he reanalysed the work of William Edward Stanbridge regarding Boorong astronomy.

Alex Cherney is an amateur astronomer and astrophotographer in Melbourne.  He has produced amazingly beautiful photography of the sky and has won several awards and honourable mentions in astrophotography competitions, including the STARMUS astrophotography contest, the David Malin awards, and several NASA "Astronomy Picture of the Day" posts.

This video was presented at the 2011 SEAC conference in Portugal.  It was developed using the Stellarium software package, which is freely available.

Posted by Indigenous Astronomy Blog at 12:39 PM No comments: