The First Astronomers: Education in the Pilbara

As Australia has the oldest continuous culture on Earth, the first Australians were very likely to have also been the first astronomers. In 2008 CSIRO astrophysicist Ray Norris set out with wildlife expert Cilla Norris to learn, collect and document the stories of Australian Aboriginal astronomy from community elders who were the custodians of these stories.

There are hundreds of different Aboriginal cultures, and therefore as many different stories about the night skies. Some have been lost since colonisation and some were sacred, private knowledge. One thing was universal: Indigenous Australians valued the sun, moon and stars for information about seasonal survival, but also for its keeping of culture and story.


There are hundreds of different Aboriginal cultures, and therefore as many different stories about the night skies. Some have been lost since colonisation and some were sacred, private knowledge. One thing was universal: Indigenous Australians valued the sun, moon and stars for information about seasonal survival, but also for its keeping of culture and story.

Ray and Cilla Norris’s publication "Emu Dreaming: An introduction to Australian Aboriginal Astronomy" became the message stick to a new generation of teachers, who are now adding the richness of Indigenous observations to astronomy science classes.

Astrophysicist Alan Duffy is one who, after being introduced to concepts of Indigenous astronomy, will never look at the Milky Way the same way again. And after visiting the Pilbara earlier this year to share his knowledge about Indigenous astronomy with students in both Indigneous and non-Indigenous schools, he is even more encouraged, with new knowledge, and optimism about the future of astronomy in Australia.

Dr Duffy’s invitation to visit schools in the Pilbara to share his love of astronomy came about as part of Pilbara Joblink and the Federal Government’s ‘Inspiring Australia’ initiative called the ‘Science career carousel’. Dr Duffy visited Karratha High School, St Luke’s College and Roeburne, a Year 6 to 9 Indigenous school.

“I initially felt awkward about being the Irish boy from the Emerald Isle who visits the red regions of the Pilbara to talk to Indigenous kids about their own ancestral knowledge,” he says. “As there is a huge variety of Indigenous stories from different regions of Australia I decided to share the ones I knew in the fine oral tradition of storytelling.”

Dr Duffy explained to the students that Indigenous astronomy is a great example of how sophisticated Aboriginal science and culture was through its development. He also explored the fundamental difference in the way traditional European astronomy conceives the constellations by connecting the dots of stars to form pictures attributed to Greek mythology, whereas Aboriginal astronomy connects not just the stars but also the black spaces in-between. Two different ways of viewing the same night’s sky!

“The school kids were very excited by the “emu in the sky” which stretches out in what European astronomers call the Milky Way,” he says. “Once you see it, you can never look at the Milky Way the same way again. As a constellation, it is far more convincing than the obscure European pictures.

“There is an engraving of the emu in the sky in stone at Ku-ring-gai Chase national park just north of Sydney, where the Guringai people lived until the British arrived in 1788, and the time of year when the emu rises just above the horizon is also the season when real emus lay their eggs; it has remarkable timekeeping accuracy. This knowledge is important to survival, especially if you were keen on a fresh egg for dinner.”

Dr Duffy also explains that stretches of the Pilbara resemble the Martian landscape more than any other on Earth, and have been used by NASA to test and train their Mars rovers.

He found the red terrain fascinating and beautiful, and was not immune to the irony that during sessions students were enjoying a NASA app allowing them to simulate driving the Mars rover on Martian landscapes created from the very place they lived and learned.

Dr Duffy says he was amazed by how much he had learnt from visiting these students in the Pilbara.

“I spoke to the students about Indigenous astronomy, on using the sky as a ‘GPS’ and a calendar. I had no idea until I had done the research that the European story of Orion the Hunter (who is upside down in Australia) chasing seven sisters (a cluster of seven stars) is essentially the same story in Indigenous astronomy where a fisherman hunter and his three brothers are also chasing the seven sisters. I agree with Ray and Cilla Norris this suggests the possibility that these stories may have come from one set of people a very long time ago.”

Dr Duffy says one the most memorable student questions during his time in the outback also revealed complex analysis of physical concepts in astronomy.

“A girl asked, if the sun is so hot why is space so cold? While the answer is simple the question is wonderfully complex. The simple answer is, just as we walk further and further away from a campfire the energy is less and it feels cold in the next paddock. But the question is beautiful, Einstein would be proud, because there is logic in the observation that is embedded in the question. Consider the notion that it takes time for a room (our planet) to heat up. It suggests there was a time when the sun did not shine but now it does. It suggests there must have been a beginning to the universe.”

Dr Duffy laughs at himself and reiterates “I’m the Irish boy from the Emerald Isle who visits the red regions of the Pilbara to remind them of what they already know. That is, the universe is a fascinating story any way you look at it.

“Learning from the elders in any culture has allowed for knowledge and know-how to be passed down the generations. Their stories have helped us make sense of the world, navigate our lives and celebrate annual rituals,” he says.

This article was first published through The Age on 13 January 2014.

Bora Ceremonial Grounds and the Milky Way: a Connection?

By Robert Fuller and Duane Hamacher

Most Aboriginal language groups in Australia practised initiation ceremonies. In some places, this tradition continues. During this ceremony, teenage boys were taken through a rite of passage, where they would perfectly recite the stories, laws, and customs they were taught, and perform the dances with extreme precision among other things (Figure 1). The initiation also involved a form of body modification, but most of these details are considered secret. This ceremony proved to their elders that they were ready to be men. In southeastern Australia, it was generally known as a Bora ceremony, taken from the Kamilaroi term for the word. The Bora ceremony was commented upon by the earliest European arrivals in Sydney. One of the first Bora sites identified was at Farm Cove in Sydney – what is now the Botanic Gardens near the Opera House.

Most Bora grounds have a distinct shape. They tend to consist of two rings of flattened earth, with an embankment of raised earth or stones, and a pathway connecting them. One is a larger “public” circle, where women and other people can attend. The other is a smaller sacred circle, which is considered sacred and secret. This is where the final part of the initiation and body modification takes place. Secret parts of the ceremony are not discussed out of respect to the Aboriginal elders.

Bora ceremonies take place between August and the following March, which are the summer months. The ceremonial grounds are often laid out long before the ceremony is held, or even renewed from previous ceremonies. Although Bora ceremonies were held at any time over this long period, it seems many of them were held in August and September. And this may have astronomical significance.

It seems the Bora ceremony is connected to the Emu in the Sky. The Emu in the Sky is a spirit emu found in the Milky Way (Figure 3). This Aboriginal constellation is not made up of bright stars, but instead comprises dark patches in the Milky Way, stretching from the Coalsack Nebula near the Southern Cross down to the centre of the galaxy in Scorpius. Since male emus brood, hatch, and rear the emu chicks, it is symbolic of the initiation of adolescent boys by their male elders. In southeast Australia, the culture hero Baiame is believed to live behind the Milky Way. The son of Baiame, is a being called Daramulan, who watches over, and even comes down from the sky for, the Bora ceremony, and his wife is an emu.

One elder said that the Bora ceremonial ground was reflected in the Milky Way as the Sky Bora: two dark patches within the Milky Way that mimic the two earthly Bora circles (Figure 4). These dark patches are also within the celestial emu: the larger one is the Coalsack (the Emu’s head) and the other is down the Milky Way towards the Emu’s body. As it turns out, August and September is when the Milky Way is vertical above the south-southwest horizon in the evening sky. Because of this connection, the researchers – Robert Fuller (Macquarie University), Dr Duane Hamacher (University of New South Wales), and Professor Ray Norris (CSIRO/Macquarie University) – wondered if the Bora ceremonial grounds were oriented to the direction of the Sky Bora/Emu in the Sky when Bora ceremonies were held. Information collected by anthropologists learning from Aboriginal elders suggested as much, but Fuller, Hamacher, and Norris needed to demonstrate this.

Fuller and his colleagues collected data for 1,170 Bora grounds in New South Wales and southeastern Queensland. They identified 68 Bora grounds that contained clear information about the site’s orientation, from the large circle to small circle (mostly within 200 km of Brisbane). The 68 sites showed that a significant number of them were oriented to the southern quadrant – more so than any other direction (and by quite a bit more!).

This is interesting, but could these results be a product of chance? To test this hypothesis, the researchers used a statistical technique called a Monte Carlo simulation. This is where random orientations, like those of the Bora grounds, were simulated millions of times over. If these orientations were common, the simulation would confirm that. The researchers ran the simulation 100 million times. Only 303 of the simulations gave a result like the one found by Fuller and his colleagues. This means the probability of these orientations occurring by chance is one in 3 million, or 0.0003%! This confirms that there is definitely a preference for Bora grounds to be oriented towards the south. This coincides with the position of the Milky Way in the evening sky during August and September.

Is this conclusive proof that Bora ceremonial grounds were oriented to the position of the Milky Way in August and September? No. But it takes us one step closer to finding out. Fuller and his colleagues are currently working with elders across NSW to learn more about the Bora ceremony and its connection to the sky, which is starting to reveal new and interesting facts about this initiation ceremony.

To learn more about the research, check out the paper “Astronomical Orientations of Bora Ceremonial Grounds in Southeast Australia.” Australian Archaeology, No. 77, pp. 30-37. 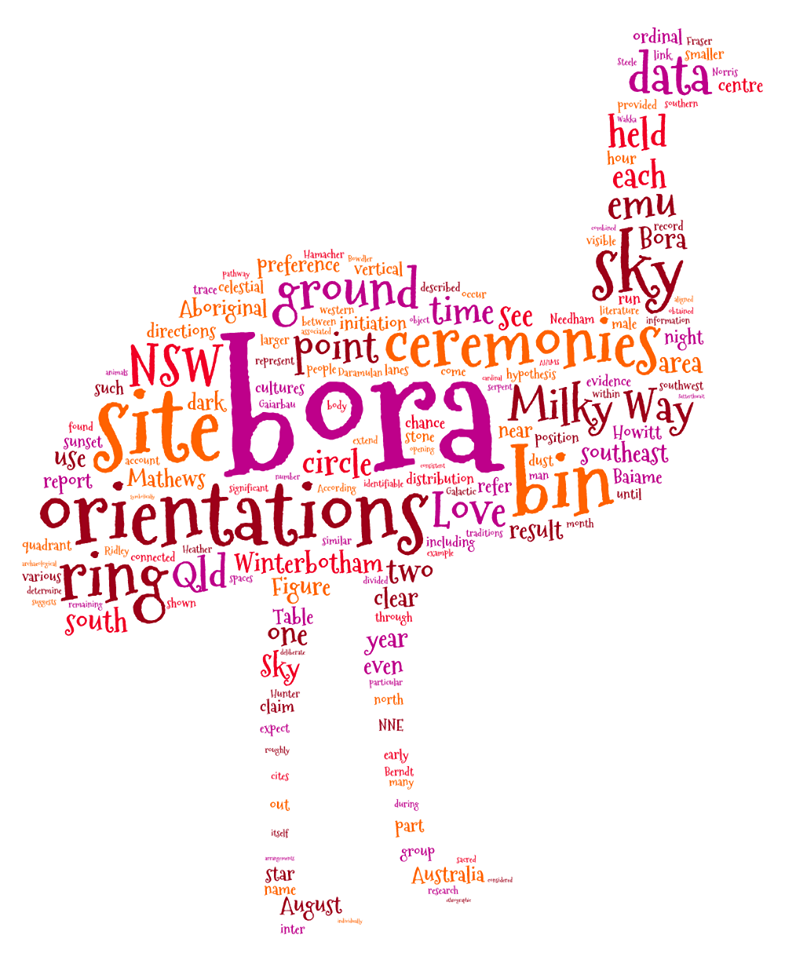 Posted by Indigenous Astronomy Blog at 5:14 PM No comments: