Early ethnographers and missionaries recorded Aboriginal languages and oral traditions across Australia. Their general lack of astronomical training resulted in misidentifications, transcription errors and omissions in these records. In western Victoria and southeast South Australia many astronomical traditions were recorded but, curiously, some of the brightest stars in the sky were omitted. Scholars claimed these stars did not feature in Aboriginal traditions. This continues to be repeated in the literature, but current research shows that these stars may in fact feature in Aboriginal traditions and could be seasonal calendar markers. This paper uses established techniques to identify seasonal stars in the traditions of the Kaurna Aboriginal people of the Adelaide Plains, South Australia. 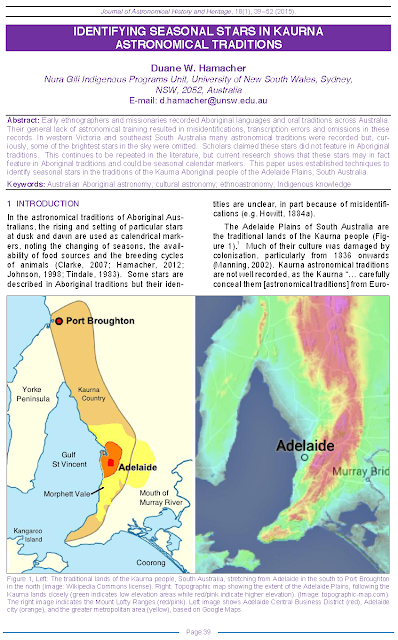 Aboriginal languages could reveal scientific clues to Australia’s unique past

By Robin Whitlock (with some edits by Duane Hamacher for accuracy)
The loss of Australian aboriginal languages could obstruct access to unique scientific information regarding Australia’s ancient geological history, according to a story reported this week by BBC News.
Ancient Australian Aboriginal legends passed down over millennia appear to verify recent scientific discoveries regarding Australia’s ancient past, including a previously untapped record of natural history among the stars. Investigation of such a resource could reveal memories of ancient meteor strikes from thousands of years ago according to research at the University of New South Wales (UNSW).

Intriguing Aboriginal rock art depicting Wandjinas, the supreme spirit beings and creators of the land and people
Dr Duane Hamacher of UNSW’s Nura Gili Indigenous Programs Unit has been able to match Aboriginal stories to impact craters dating from 4,700 years ago. One such location, at Henbury in Australia’s Northern Territory, is reflected in local oral traditions that have been passed down across the generations.

Henbury Meteorites Conservation Reserve, located 145 kilometers south west of Alice Springs, is estimated to have hit the earth’s surface < 4,700 years ago, it contains 14 craters in total. 2006, Photo by W & S Roddom. (Wikimedia Commons)
Indigenous Australian history is believed to span a period of between 40,000 to 45,000 years with some estimates indicating an Aboriginal presence in Australia some 80,000 years before the arrival of the first Europeans. The number of Aboriginal groups could amount to several hundred, many of which date to well before the colonization of Australia by the British in 1788. The largest of the groups in existence today is the Pitjantjatjara people who live around Uluru (Ayers Rock) and extend into the Anangu/Pitjantjatjara/Yankunytjatjara in South Australia.
It is thought that at the time of the first European settlement in Australia, some 250 distinct languages were spoken among Aboriginal peoples. Given that many of these languages would also have had their own dialects, the number of potential linguistic forms could extend to several hundred, according to authors Michael Walsh and Colin Yallop.

Map of Australia showing the distribution of different Aboriginal languages (David R Horton, creator, Credit: Aboriginal Studies Press)
Researchers have fortunately been able to revive one of these ancient languages, previously suppressed by European colonization. The Kaurna language was once spoken by Aboriginal peoples around the present city of Adelaide but it began to disappear from South Australia from the early 1860’s.
According to the stories of the Luritja people, a fire-devil arrived on the Earth seeking vengeance for the breaking of sacred laws. The story was handed down across more than 200 generations before the site of this event was finally identified in 1931.
The Henbury Meteorite Conservation Reserve was previously regarded as a taboo ‘no-go’ area by the Luritja. Scientists have now been able to establish that the ‘fire devil’ was actually an ancient meteorite that blasted several impact craters into the red-colored sand with an atomic level of power.

Meteoritic iron, found in Henbury, Australia, 1931 - Higgins Armory Museum, 2011. Photo by Daderot (Wikimedia Commons)
“Aboriginal oral traditions contain detailed knowledge about the natural world” said Dr Hamacher, who leads a group of nine researchers in Nura Gili's Indigenous Astronomy Group. “By merging scientific data with descriptions in oral tradition we can show that many of the stories are accounts of real-life events. So Aboriginal stories could lead us to places where natural disasters occurred.”
The dozen or so craters created by the meteorite and its fragments have diameters of up to 180 meters across. When scientists first entered the area in 1931, the Aboriginal guide they had brought with them refused to go any further. Luritja elders later told a local resident that the ‘fire devil’ will burn and eat anyone who breaks the sacred law.
Aboriginal peoples hold other stories of ancient natural disasters that have now been shown to be authentic by modern investigation. The Gunditjmara people for instance, tell of a giant wave that swept inland and killed everyone who hadn’t gone up to the mountains.
When Dr Hamacher travelled to Victoria with tsunami expert Professor James Goff, also of UNSW, he found a layer of sediment 1.5 to 2 meters deep at a number of different locations between 500 meters and 1 kilometre inland, suggesting an ancient tsunami had swept over the area hundreds, perhaps thousands, of years ago.
These and other Indigenous stories could be of great benefit to researchers investigating Australia’s history and geology. They also reveal an understanding of the universe among ancient societies, the existence of which wasn’t widely accepted before.
If Aboriginal languages and dialects, that are currently at risk, can be protected and revived, who knows what else they may have to offer?
This article appeared on the Ancient Origins website, which was a rewrite of the original BBC article.

Posted by Indigenous Astronomy Blog at 1:54 PM No comments:

Fire in the sky: The southern lights in Indigenous oral traditions


Parts of Australia have been privileged to see dazzling lights in the night sky as the Aurora Australis – known as the southern lights – puts on a show this year.
A recent surge in solar activity caused spectacular auroral displays across the world. While common over the polar regions, aurorae are rare over Australia and are typically restricted to far southern regions, such as Tasmania and Victoria.

But recently, aurorae have been visible over the whole southern half of Australia, seen as far north as Uluru and Brisbane.

It’s a phenomenon that has existed since the Earth’s formation and has been witnessed by cultures around the world. These cultures developed their own explanation for the lights in the sky – many of which are strikingly similar.
From a scientific point of view, aurora form when charged particles of solar wind are channelled to the polar regions by Earth’s magnetic field. These particles ionize oxygen and nitrogen molecules in the upper atmosphere, creating light.
Auroral displays can show various colours, from white, to yellow, red, green, and blue. They can appear as a nebulous glowing arcs or curtains waving across the sky.
Aurorae are also reported to make strange sounds on rare occasions. Witnesses describe it as a crackling sound, like rustling grass or radio static.
In the Arctic, the Inuit say the noise is made by spirits playing a game or trying to communicate with the living.
In 1851, Aboriginal people near Hobart said an aurora made noise like “people snapping their fingers”. The cause of this noise is unknown.
Aurorae are significant in Australian Indigenous astronomical traditions. Aboriginal people associate aurorae with fire, death, blood, and omens, sharing many similarities with Native American communities. They are quite different from Inuit traditions of the Aurora Borealis, which are more festive.

Fire in the sky

Aboriginal people commonly saw aurorae as fires in the cosmos. To the Gunditjmara of western Victoria, they’re Puae buae (“ashes”). To the Gunai of eastern Victoria, they’re bushfires in the spirit world and an omen of a coming catastrophe.
The Dieri and Ngarrindjeri of South Australia see aurora as fires created by sky spirits.
As far north as southwestern Queensland, Aboriginal people saw the phenomenon as “feast fires” of the Oola Pikka —- ghostly beings who spoke to Elders through the aurora.
The Maori of Aotearoa/New Zealand saw aurorae (Tahunui-a-rangi) as the campfires of ancestors reflected in the sky. These ancestors sailed southward in their canoes and settled on a land of ice in the far south.
The southern lights let people know they will one day return. This is similar to an Algonquin story from North America.

Mungan Ngour, a powerful sky ancestor in Gunai traditions, set rules for male initiation and put his son, Tundun, in charge of the ceremonies. When people leaked secret information about these ceremonies, Mungan cast down a great fire to destroy the Earth. The people saw this as an aurora.
Near Uluru, a group of hunters broke Pitjantjatjara law by killing and cooking a sacred emu. They saw smoke rise to the south, towards the land of Tjura. This was the aurora, viewed as poisonous flames that signalled coming punishment.
The Dieri also believe an aurora is a warning that someone is being punished for breaking traditional laws, which causes great fear. The breaking of traditional laws would result in an armed party coming to kill the lawbreakers when they least expect it.
In this context, fear of an aurora was utilised to control behaviour and social standards.

Blood in the cosmos

The red hue of some aurorae is commonly associated with blood and death.
To Aboriginal communities across New South Wales, Victoria, and South Australia, auroral displays represented blood that was shed by warriors fighting a great battle in the sky, or by spirits of the dead rising to the heavens.
Celestial events that appear red are often linked to blood, including meteors and eclipses.
A total lunar eclipse turns the moon red (sometimes called a blood-moon), which was seen by some communities as the spirit of a dead man rising from his grave.
Rare astronomical events were viewed as bad omens by cultures around the world. Now imagine if two of these events overlap!
In 1859, Aboriginal people in South Australia witnessed an auroral display and a total lunar eclipse. This caused great fear an anxiety, signalling the arrival of dangerous spirit beings.
There could be a repeat of this astronomical double-act as a lunar eclipse will be visible across Australia on Saturday April 4, 2015.
Will the aurorae continue? Keep watch.
----
This article was originally published in The Conversation on 2 April 2015, 6.09am AEDT.
Posted by Indigenous Astronomy Blog at 9:50 PM No comments: