Notice to Aboriginal and Torres Strait Islander people: This article contains the name of an Indigenous person who has passed away.

This article is adapted, revised and updated from “Cosmic Impacts in the Kimberley”, by John Goldsmith, Landscope, 2000, and is based on information from Bevan and De Laeter, "Meteorites, A Journey through Space and Time", and Bevan and McNamara (2009) "Australia's Meteorite Craters".

Wolfe Creek Crater (Figure 1) is one of the best-preserved and most spectacular meteorite craters in the world. It is not only a highly significant site for scientific research and important tourist attraction, but also one of the few locations in the world where local Indigenous knowledge and culture relates directly to the crater itself.

The crater is situated in the Kimberley region of Western Australia, approximately 130 km south of Halls Creek, on the edge of the Great Sandy Desert. The crater is accessed by the Tanami Desert Road, a gravel road that links Halls Creek to Alice Springs. The crater is protected by a National Park and is managed by the Department of Environment and Conservation. 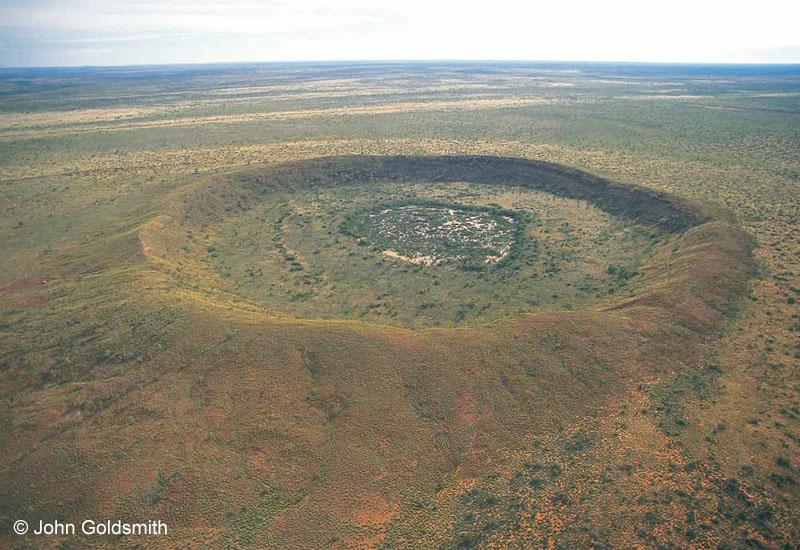 Scientists found that the impactor was an iron meteorite weighing thousands of tons. The tremendous energy of the impact caused a blast 30 times more powerful than the bomb dropped on Hiroshima, resulting in a near-circular crater almost 900 meters in diameter and 150 meters deep.

Geologists have estimated that the impact occurred more than 300 000 years ago. Since then, the process of erosion has slowly worn down the crater walls, while wind-blown sand and dust have partially filled the crater floor. However, the crater walls remain quite steep, and in places drop to sheer cliffs, particularly on the inner side of the northeastern crater wall. The crater walls presently stand about 40 meters above the surrounding flat plain, and the almost flat crater floor is 60 meters deep; about 20 meters below the surrounding plain. The outer portion of the crater floor is sandy, while the central portion consists of sand, silt and salt deposits. Sinkholes are located near the middle of the crater, and some water is present virtually all the year (Figure 2). 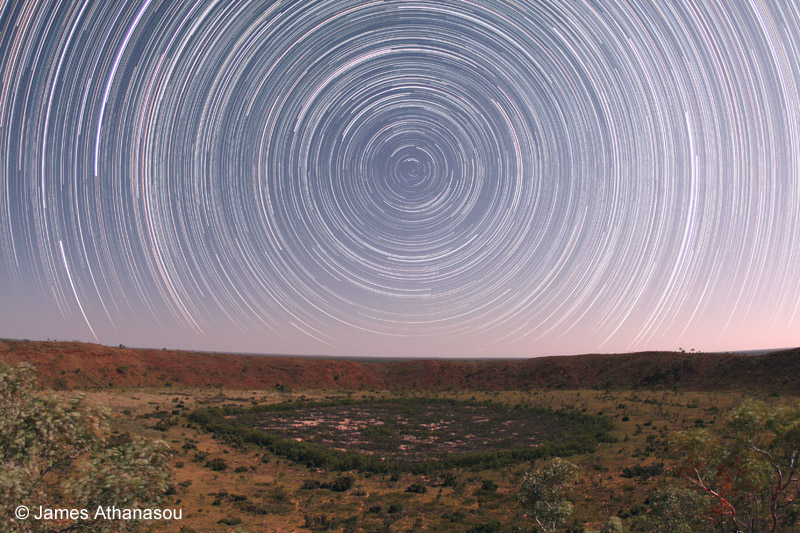 Although some small iron meteorite fragments have been discovered in the vicinity of the crater, very few particles of the original meteorite have survived. During the millennia that have passed since the impact, the meteorite has largely rusted away.

The non-indigenous identification of the crater came in 1947 when F. Reeves, N.B. Suave and D. Hart observed it during an aerial survey of the Canning basin in 1947. A field visit followed two months later. A wide range of scientific studies have been conducted regarding Wolfe Creek Crater. These studies include a range of geophysical, ecological, space sciences, and cultural/ethnographic studies. In addition, the crater has featured in several film productions, cultural studies and exhibitions. A brief synopsis showing examples of research and documentation relating to Wolfe Creek Crater is provided below:


In 1997, the famous U.S. geologist Eugene Shoemaker was tragically killed in a vehicle collision on the Tanami Desert Road while on an expedition to Wolfe Creek crater. Shoemaker led groundbreaking research into crater studies, and was the co-discoverer of Comet Shoemaker-Levy 9 (with his wife, Carolyn, and David Levy), which fragmented and collided into Jupiter. In 1999, part of his cremated remains were taken to the moon via the Lunar Prospector, and he is currently the only person to have been buried on the moon. 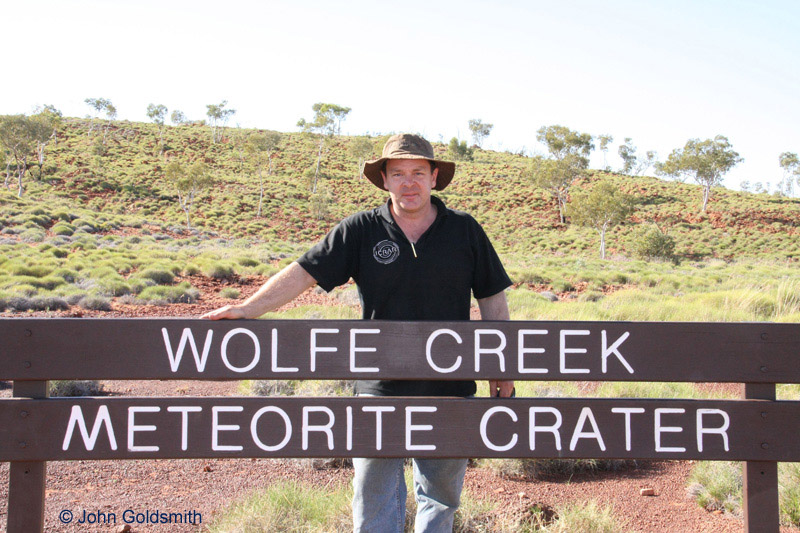 During my visits to Halls Creek and Wolfe Creek Crater, I met Indigenous elders and local Indigenous people, who shared their stories and knowledge about the crater. I documented these discussions on video, recorded extensive notes, photographs, purchased examples of Indigenous artwork depicting the crater, and obtained drawings and sketches relating to Indigenous astronomical knowledge.

My visit to Wolfe Creek Crater in 1999 enabled video interviews to be carried out with Jack Jugarie at Wolfe Creek Crater, and helped to document a unique record of Jugarie’s knowledge of the night sky and knowledge about the crater. It appears that Jugarie had never been asked before about his astronomical knowledge. This knowledge was very close to being lost forever, because Jugarie suddenly passed away, shortly after the 1999 visit to the crater. The records of past site visits have therefore become an important record of such knowledge. An overview of Wolfe Creek Crater and some of the Indigenous cultural connections to the crater is provided in my Landscope article “Cosmic Impacts in the Kimberley”. The high degree of respect towards Elder Jack Jugarie is indicated by the erection of a statue to commemorate Jack Jugarie by the Halls Creek community (Figure 5). 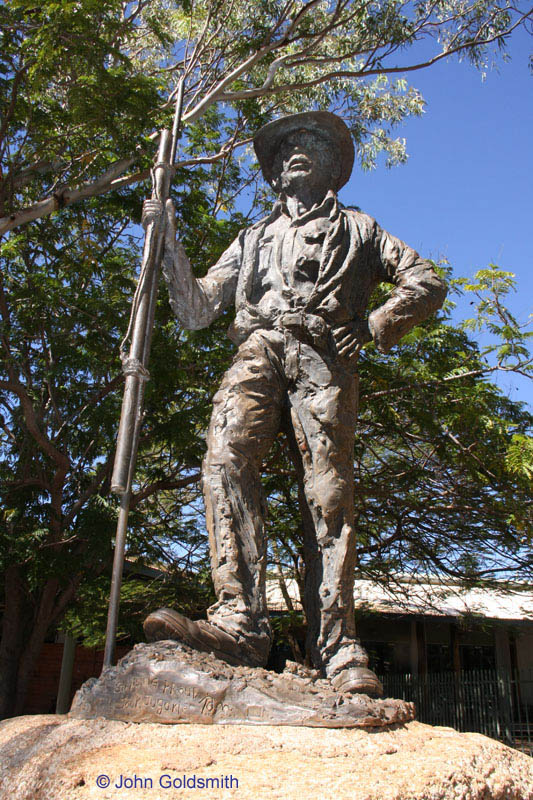 The Wolfe Creek Meteorite Crater is known as “Kandimalal” in the Djaru language. The crater is recognised in stories, personal experience, knowledge, art and song by Djaru and other Indigenous people. Djaru Elders refer to several stories relating to the crater. One well-known story (which is presented in the National Park signage on site) refers to the passage of two rainbow snakes, which formed the nearby Wolfe Creek and Sturt Creek as they crossed the desert. In the Dreamtime, one snake emerged from the ground, forming the circular crater.

In 1999, I recorded a story about a “star” that fell from the sky and became buried in the ground, forming the crater. According to Djaru Elder Jack Jugarie, one day, the crescent moon and the evening star passed very close to each other. The evening star became so hot that it fell to the ground, causing an enormous explosion, flash, dust cloud and noise. This frightened the people and a long time passed before they ventured near the crater to see what had happened. When they ventured to crater, it was realised that this was the site of where the evening star had fallen to the Earth. The Djaru people then named the place “Kandimalal” and is prominent in arts from the region (Figure 6). 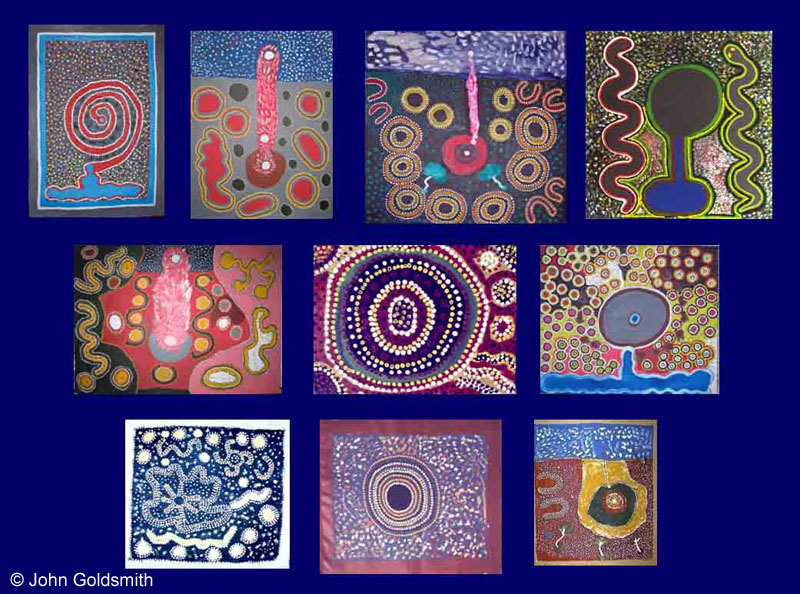 Interestingly, this story closely parallels the scientific explanation of the crater forming from the impact of a large meteorite. Jack Jugarie indicated that this account was passed down from his grandfather's grandfather, which suggests that the story originates from before the first contact with Europeans.

Another story relates to the sinkholes in the centre of the crater. One day, a Djaru man entered the crater and saw water in the sinkholes. He entered a sinkhole to discover a passage that went several kilometres underground to emerge at a nearby creek. After a considerable trek, he emerged into daylight. It is said that because of the link from the crater sinkholes and the creek, the crater floor never floods. This story is recounted with particular delight, noting the risk of snakes in the sinkholes and the darkness of the underground passages, highlighting the man’s bravery. There are various versions of this story, generally the underground passage is said to emerge at Sturt Creek, but Wolfe Creek has also been indicated.

The clear, dark skies of the Kimberley have enabled a remarkably intimate knowledge of cosmic events by some Djaru people. Jack Jugarie described a rare meteoric phenomenon that produces sound and vibration. Such events are known to occur when meteors cause sonic booms. Remarkably, this rare phenomenon is not only known, but was even given the name "Coolungmurru".

Wolfe Creek crater (Figure 7) is open to the public and we encourage you to visit the site, but please respect the land and the Traditional Owners: leave nothing but footprints, take nothing but photos, and kill nothing but time. 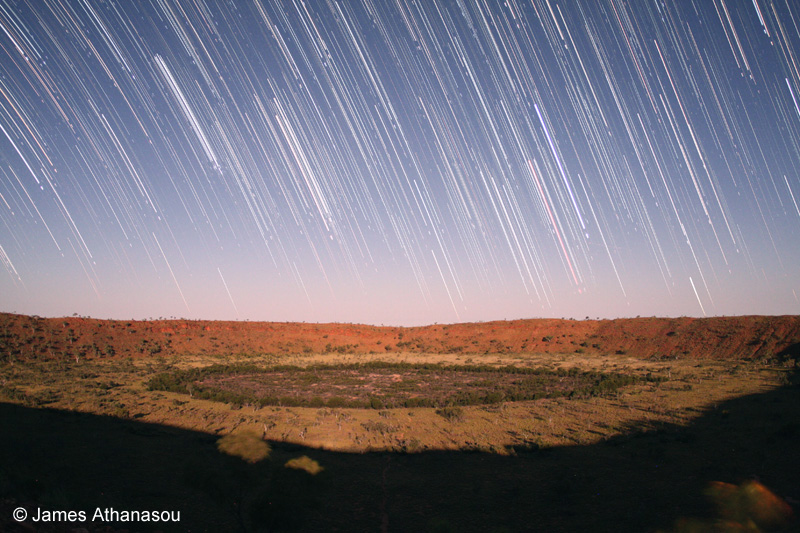 John is a PhD candidate at the International Centre for Radio Astronomy at Curtin University in Perth, Western Australia and a member of the Aboriginal Astronomy Project who is investigating the way in which Aboriginal sky knowledge is being documented, shared, and communicated.

As part of his fieldwork to Wolfe Creek Crater in August 2010, he visited the Billiluna Community and the Kururrungku Catholic Education Centre, as part of the CSIRO ‘Scientists in Schools’ initiative. Billiluna is the nearest community to Wolfe Creek crater. The school visit enabled a discussion about astronomy and the importance of the crater. The interest shown by school children is clearly evident in their interaction with a photo of Wolfe Creek Crater (Figure 8). 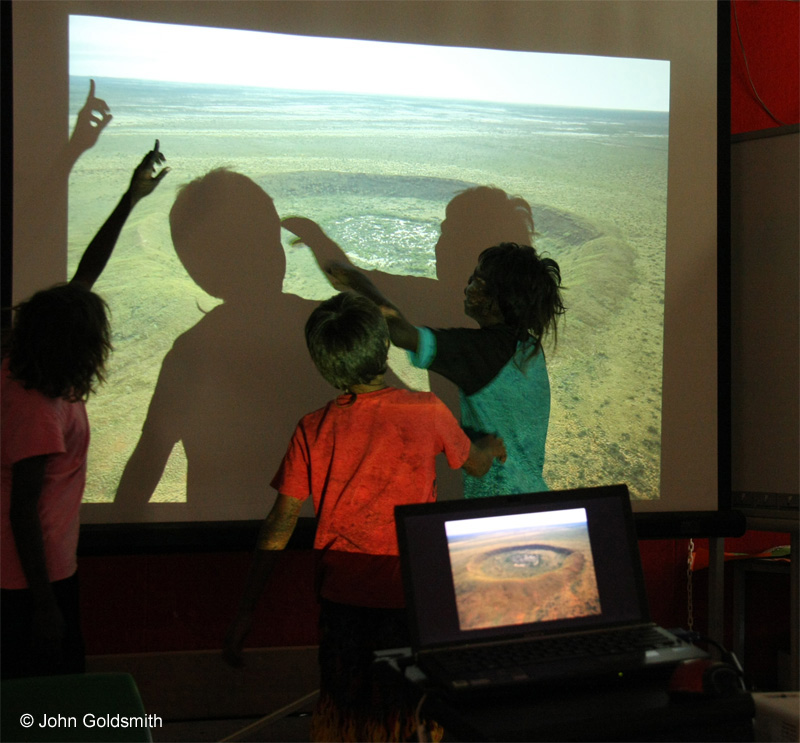 His doctoral research is based on a highly successful Yamaji Art and ICRAR collaboration, which resulted in the development of the “Ilgarijiri, Things Belonging to the Sky” exhibition, which featured astronomically themed Aboriginal artwork. The exhibition was featured at Geraldton, Perth (Curtin University), Canberra (AIATSIS), and Cape Town, South Africa. There are current plans for the first U.S. exhibition in Washington. John's research also involves compiling and presenting documentation about Wolfe Creek Crater and Aboriginal knowledge and beliefs relating to the crater. The emphasis of the research is about the documentation, communication and sharing of Aboriginal astronomical knowledge in contemporary society.

We respectfully acknowledge the Djaru People and Elders, both past and present.