Notice to Aboriginal and TSI people: this blog contains the names of Indigenous people that have passed away.
Last week we discussed comets and how they were perceived by Aboriginal Australians in the past.  This week, we will talk about historic “Great Comets”.  Comets with orbits that take them close to the earth may appear to be very bright in the sky, some of which can even be seen during the day. These are commonly referred to as "Great Comets", and over the last 200 years, we have been visited by one of these comets about twice a decade, although we may go 10 years without seeing one, or we may have two in the same year, such as in 1910 and 1911 (see Table 1 for a complete list of Great Comets from 1800-2000).
Table 1: A list of "Great Comets" from 1800-2000.  Click on the image to zoom. 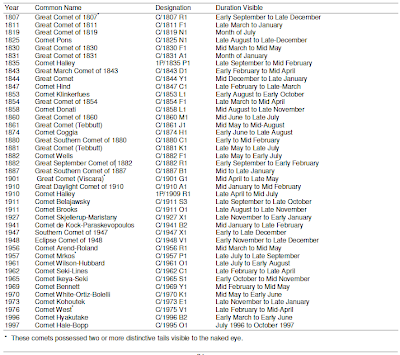 In the two hundred years between 1800 and 2000, about forty naked eye comets were visible (Table 1) from Australia, or on average one every five years.  So we could say that naked eye comets were not particularly rare, and this is reflected in the fact that some of the literature and ethnographic accounts relating to Aboriginal astronomy do not simply describe perceptions of comets but refer to particular historic comets, including the ‘Great Comets’ of 1843, 1861, 1901, 1910, 1927, and Comet Halley. In some cases, the comet is not identified by name, but is inferred from the description and date.
The Great Comet of 1843
The Great Comet of 1843 was a bright, sun-grazing comet visible in the Southern skies from late-February to mid-April. It was visible near the Sun (within 1°) and became brightest on 7 March. The comet, so frightening in its brilliance (see Figure 1), prompted Aboriginal people near Port Lincoln, South Australia to run and hide in caves.  The Ngarrindjeri of South Australia saw the comet as a harbinger of calamity, specifically to the white colonists. They believed the comet would destroy Adelaide then travel up the Murray causing havoc in its path:
“In March 1843, I had a little boy living with me [in Moorunde, SA] by his father's permission, whilst the old man went up the river with the other natives to hunt and fish. On the evening of the 2nd of March a large comet was visible to the westward, and became brighter and more distinct every succeeding night. On the 5th I had a visit from the father of the little boy who was living with me, to demand his son; he had come down the river post haste for that purpose, as soon as he saw the comet, which he assured me was the harbinger of all kinds of calamities, and more especially to the white people. It was to overthrow Adelaide, destroy all Europeans and their houses, and then taking a course up the Murray, and past the Rufus [the site of an Aboriginal massacre], do irreparable damage to whatever or whoever came in its way. It was sent, he said, by the northern natives, who were powerful sorcerers, and to revenge the confinement of one of the principal men of their tribe, who was then in Adelaide gaol, charged with assaulting a shepherd; and he urged me by all means to hurry off to town as quickly as I could, to procure the man's release, so that if possible the evil might be averted. No explanation gave him the least satisfaction, he was in such a state of apprehension and excitement, and he finally marched off with the little boy, saying, that although by no means safe even with him, yet he would be in less danger than if left with me.”
When the Great Comet of 1843 was seen in Victoria, it caused “… dreadful commotion and consternation…” among the communities. “Spokesmen [presumably Elders or medicine men] gesticulated and speechified far into the night …” in an attempt to rid the comet, but with no success. When their actions seemed in vain, they packed up camp in the middle of the night and moved to the other side of the river and remained huddled together until morning. They believed that the comet had been sent to them by the Aboriginal people near Ovens River in northern Victoria to cause harm. They left the area and did not return until the comet faded away. Aboriginal people near Kilmore (Victoria) said that the tail of this ‘grand comet’ consisted of spears thrown by Aboriginal people near Goulburn to one another. 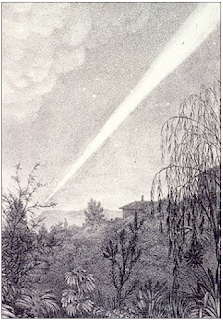 The Great Comet of 1861
After surviving the shipwreck of the Peruvian in the Great Barrier Reef in 1846, four members of the crew reached Cleveland Bay on the coast of Queensland near present-day Townsville. One of the survivors, James Morrill, lived among the local Aboriginal people for 17 years, publishing his journals in 1864. He notes how the Aboriginal people used the same word for comets and stars (nilgoolerburda) and explains that comets were believed to be the spirits of men killed far away returning home, making their way from the clouds to the horizon. He described seeing a comet during the previous dry season (June to November) and noted that the Aboriginal people thought it was “… one of the tribe who had been killed in war…”. Morrill does not give a date for this sighting, but does go on to say that he witnessed a nearly total solar eclipse about six years earlier. From 1846 to 1864, only two nearly total solar eclipses (where the Moon covered >80% of the Sun) were visible from this region: on 5 April 1856 (T = 17:05:31) and 18 September 1857 (T = 17:28:04, where T is the time of mid-eclipse), despite Morrill claiming that he only saw one eclipse during the time that he was living among the Aboriginal people. This gives a period of approximately five years between the eclipse and the comet sighting, revealing the best candidate is the Great Comet of 1861, which is depicted in Figure 2 as the Earth was about to pass through its tail. This comet was discovered by the Windsor-based Australian amateur astronomer, John Tebbutt, and from Australia was visible as a conspicuous naked eye object from mid-May through to near the end of June, during the dry season, which implies that Morrill’s account was recorded in 1862. This comet had a distinctive tail that at its best extended 42°, and the comet appeared brightly in the northern sky throughout June as the Earth approached its tail.  The Aboriginal people told Morrill the comet was a spirit coming down from the clouds onto the horizon. 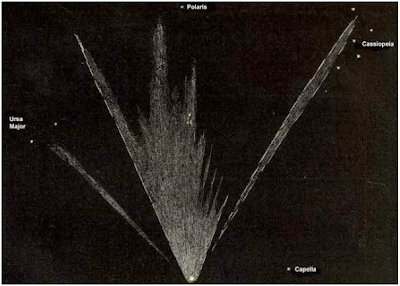 Figure 2: Williams’ drawing of Comet Tebbutt made on 30 June 1861, just after the Earth passed through its tail.
By this time it was a very conspicuous object but was only visible to Northern Hemisphere observers.

The Great Comet of 1901
While engaging in ethnographic fieldwork in Queensland from 1901 to 1908, anthropologist and Northern Protector of Aboriginals, Walter E. Roth, noted that the Tjungundji people near Mapoon (Marpuna) on the western coast of Cape York Peninsula saw a comet as a fire lit by two old women. This was probably a reference to the recent Great Comet of 1901, which was visible exclusively in the Southern skies from mid-April to late-May and displayed distinctive, bright twin tails (Figure 3). In early May, when it reached peak brightness, the comet transversed the boundary between Taurus and Eridanus. The head of the comet, of magnitude 0 on 3 May and +2 on 6 May, would have appeared in the western evening skies near the horizon with the twin tails, comprising a 30° straight tail and a 10° curved tail, pointing upwards towards the star Sirius. By 12 May, the longer tail extended to the star d Leporis. At this time, the comet would have looked very much like two smoke columns diverging from a single point on the horizon. The comet remained visible until 23 May with the tails increasing in length to 45° and 15°, respectively.
The Kaitish of the Northern Territory believed a comet was a bundle of spears belonging to a star endowed with a very strong magic. The people feared these spears would be thrown to Earth, killing many. It was believed by some that powerful members of the community could control natural events.  To avert the evil of the comet, a young, celebrated medicine man named Ilpailurkna was visiting the area from the neighboring Unmatjera clan. Each night he would project his magic stones towards the comet. As the comet faded away, its evil was overcome and the people were very grateful that Ilpailurkna had saved them. In the eyes of the community, had Ilpailurkna not driven the comet away, it would have fallen to Earth as a bundle of spears and everyone would have been killed. 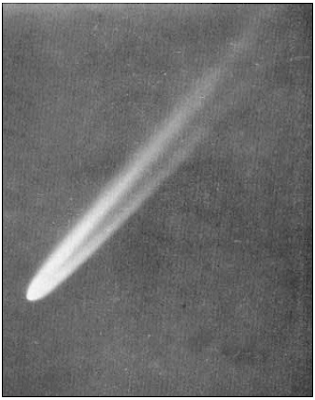 Figure 3: Photograph of the Great Comet of 1901 with bright twin tails.
Taken at the Royal Observatory, Cape of Good Hope, South Africa. 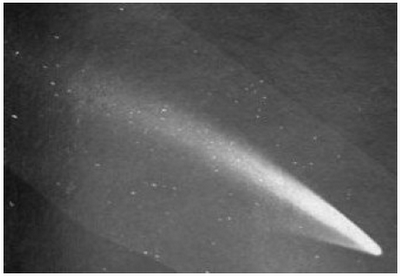 Figure 4: The Great Daylight Comet of 1910 appeared just four months before Comet Halley but was
brighter than Venus at its peak (image rotated clockwise by 90°). Photograph from Lowell Observatory.
The Great Comet of 1927
Paddy Roe, a Nyigina elder, told of the appearance of a comet in the early twentieth century by an Aboriginal community on the Roebuck Plains west of Broome, Western Australia. The comet, which he described as “... a star with a tail ...”, was seen as a bad omen. However, after nothing bad happened the community held a celebratory corroboree.  Roe states that the comet was first seen during the “... new moon when the moon was a crescent...” (this refers to the time after a new Moon when the Moon appears as a thin crescent). These accounts date to the period “between the Wars”, presumably referring to World Wars I and II (between 1918 and 1939). The best candidate is the Great Comet of 1927 (Figure 5), discovered on 4 December 1927 by the Australian amateur astronomer John Francis Skjellerup when it was a third magnitude object with a 1° tail (although others claimed to have discovered it on 28 November 1927). The comet, first detected in the Southern Hemisphere, was visible primarily during the day and early evening. By the time it was visible at night, it faded rapidly. Since the comet was near the solar disc but could still be seen during the day, the sighting of Comet Skjellerup-Maristany is consistent with being seen at the time of a new Moon (the day it was claimed to have first been discovered, 28 November 1927, was just after new Moon), although this identification is uncertain. 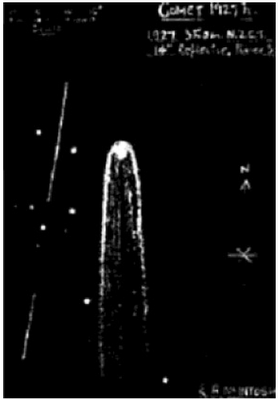 Figure 5: Drawing of Comet Skjellerup-Maristany by R.A. McIntosh on 5 December 1927 (Orchiston Collection).
Although nearly all of the descriptions here are second-hand Western accounts, these accounts provide an important historical record of Great Comets from an Aboriginal perspective. We see that comets are frequently associated with spears due to the comet’s appearance resembling a bundle of spears, and that perceptions of comets amongst Aboriginal societies were usually associated with fear, death, omens, malevolent spirits, and evil magic, due to their awe inspiring and relatively unexpected nature, consistent with many cultures around the world.
Posted by Indigenous Astronomy Blog at 5:05 PM