Dreaming on the Stars

Our blog has recently been featured in the Campus Review, entitled Dreaming on the Stars.  The full text of the article is given below.
By Jennifer Bennett (19 October 2011)
The Australian Aboriginal Astronomy Blog, which highlights the thousands of years of sky gazing of the original inhabitants of this country England has Stonehenge and Peru has the Nazca Lines, strange standing stones and carvings that are all that are left of ancient astronomical observations, but what many people may not know is that Australia has its own equivalents. Macquarie University PhD candidate Duane Hamacher runs the Australian Aboriginal Astronomy Blog, which highlights the thousands of years of sky gazing of the original inhabitants of this country.
Hamacher, who is originally from the United States, studied in Australia for a period as an undergraduate and loved it so much he returned to complete a research masters in astrophysics at the University of NSW.  After that though he decided he wanted to do something a little different and started looking at the intersection of astronomy and Aboriginal culture. He said that while it was an area that had been studied for a long time, the first paper on the topic came out in the 1850s, there was still much to learn.
“Compared to how big Australia is, and just the sheer volume of time people have been here, over 50,000 years, there is a tremendous amount of knowledge to learn,” he said. “When you look at it on a grand scale, it’s just not been researched very much and I found it to be completely open territory.”
The blog (described as a “loose collaboration”) features both work Hamacher has been directly involved in, as well as research by his supervisor and other astronomers in the field. “One of the things that we’ve found with a colleague is that an Aboriginal group in Victoria, the Boorong, actually noticed the eruption of the hyper-giant variable star Eta Carina in the 1840s and incorporated it into their rituals, and it’s the only indigenous account from all over the world that we have,” he said. 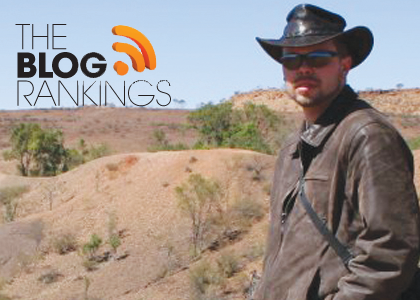 The blog, which has been running since late last year, is almost at 20,000 hits, many of which come from overseas. “Astronomy is arguably the most famous of all the sciences and the one that generates the most public interest, so I think when you cross astronomy with culture, you’re going to generate a lot of interest,” Hamacher said.
One site that should pique the public interest is Wurdi Youang, a complex arrangement of stones in a secret location between Melbourne and Geelong. It can be used to mark solstices and equinoxes and is made from some 100 basalt stones of about waist height.
“We have no idea [what it was used for],” he said.  “The problem is that when the British came through Victoria they drove a lot of people from their lands, and what Aboriginal people were left there had their languages and traditions banned, mostly by missionaries. We’re in contact with the local custodians, though, and they are very interested in learning more too … so it’s interesting to put together these bits of information.”
Posted by Indigenous Astronomy Blog at 12:28 AM