Rock art is found all across Australia, in all states and territories.  Some of it is known to have astronomical symbolism, while other sites are more ambiguous.  Here, we explore the extent to which  astronomical traditions are reflected in Aboriginal rock art. It is instructive to note that in some cases where the traditional Aboriginal culture is largely intact, we have first-hand accounts linking rock-art to astronomy (such as Wardaman elder Bill Yidumduma Harney). However, in some of these cases, such as Figure 1, the astronomical connection would not be apparent to a Western researcher unless guided by cultural knowledge. 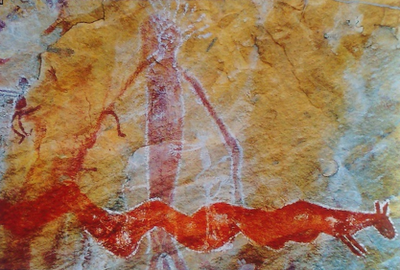 Figure 1: Wardaman rock painting of the “Sky Boss” and the Rainbow Serpent. The serpent at the bottom represents the Milky Way, and the head of the Sky Boss is associated with the “Coalsack nebula”, although a researcher could not deduce this astronomical connection without access to the cultural insight of Wardaman elder Bill Yidumduma Harney. (Photo courtesy of Bill Yidumduma Harney).
Other rock art sites in Australia display motifs of astronomical designs, but their meaning has clearly incorporated Western culture. For example, on a hilltop near Palm Valley, Northern Territory is a depiction of the sun, crescent moon, and stars.  However, the Arrernte description of the site has evolved from a traditional view to one that was shaped by Lutheran missionaries that settled the area in the late 19th century. When asked about the purpose of these astronomical engravings, the Arrernte informant explained that they had been placed there by God to direct Jesus while in the desert.  Many features of the landscape had incorporated Christian mythology into the pre-existing oral traditions, including that of a star that was said to have fallen and made a hole between two trees where the Hermannsburg church was later built. Other geographical features of the area served a mnemonic purpose relating the land to Christian events, such as Noah's Flood and the inception of the 10 commandments.
Near Kalumburu, Western Australia is a rock painting on the side of a rock called Comet Rock.  Geologist Ted Bryant suggested that the painting represents a motif of a cometary fragment that impacted the Indian Ocean causing a great tsunami that swept over the land, which he claims is supported by Aboriginal stories. The rock is 5 km from the ocean on a plain covered in a layer of beach sand (Figure 2).  A similar example is a Dreaming story that describes a cosmic impact, followed by a deluge, in the Darling Riverbed near Wilcannia, NSW. According to Jones, rock art on Mt Grenfell showing people standing on one another’s shoulders may represent people climbing the mountain to escape the flood. In addition, certain star-like motifs can be found engraved in rock in the Sydney-Hawkesbury region, although their meaning is unknown. These designs typically involve a small circle with lines radiating outward, suggesting a sun, star, or "sunburst" motif.

Figure 2: Comet Rock, which Ted Bryant speculates is a representation of a comet that impacted the Indian Ocean, causing a massive tsunami.
The Sun and Moon in Aboriginal Rock Art
In most Aboriginal cultures, the Moon is male and the Sun is female. For example, a Yolngu oral tradition explains the motion of the Sun in terms of Walu, the Sun-woman. She lights a small fire each morning, producing the dawn, and decorates herself with red ochre, some of which spills onto the clouds, to create the red sunrise. Carrying a blazing torch made from a stringy-bark tree, she travels across the sky from east to west, creating daylight. At the western horizon, she extinguishes her torch, and travels back underground to her morning camp in the east.  An ethnographer was told "the Sun goes clear around the world" by a Yolngu man who illustrated this "by putting his hand over a box and under it and around again."
The Yolngu people call the Moon-man Ngalindi. The phases of the Moon are caused by Ngalindi being attacked by his wives, who chopped bits off him with their axes, reducing him from the fat full moon to the thin waning Moon, and eventually dying (the new Moon).  After staying dead for three days, he rose again, once more growing round and fat to become the full Moon, when his wives attacked him again.
Yolngu culture also recognises that the tides are caused by the Moon, and that the height of the tides depends on the phases of the Moon. This is explained in terms of a complicated interaction between the rising Moon and the Sea, the Moon alternately filling and emptying, depending on its phase, as it rises through the ocean horizon. While it is dangerous to generalise from one Aboriginal culture (Yolngu) to others, there exist similarities that transcend Aboriginal cultures, such as the gender of the Sun and Moon, which are almost universally female and male respectively.
Given these strong oral traditions, we might expect to find depictions of the Sun and Moon in Aboriginal rock art.  Obvious examples of solar images exist, such as those at Ngaut Ngaut, South Australia (Figure 3) and many more are surmised, such as the "bicycle wheel" or "sunburst" petroglyphs in the Panaramittee engravings at Sturts Meadows, NSW (Figure 4). However, the latter can entertain many interpretations, including a supernova, and caution is required when interpreting such images in the absence of cultural context. 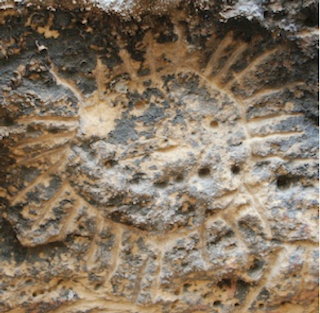 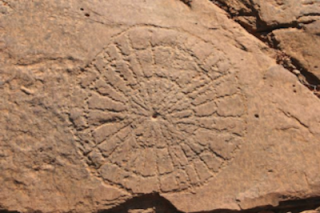 Figure 4: A “bicycle-wheel” or “sunburst” petroglyph at Sturts Meadows, NSW. While this may represent the sun, or perhaps even a supernova, there is no additional information to support these interpretations, and so any interpretation remains speculative.
Crescent shapes are also common, and may represent the moon, although they have also been attributed to boomerangs.  Many examples of crescent shapes are found in the Sydney Basin rock engravings, and are traditionally referred to as boomerangs (such as Fredrick McCarthy). However, there is a clear difference between a boomerang-shape and a crescent moon: boomerangs typically have straight sides and rounded ends, whereas the crescent moon always has a curved shape and pointed ends (Figure 5). It is therefore likely that the Sydney Rock Engravings contain a significant astronomical component. 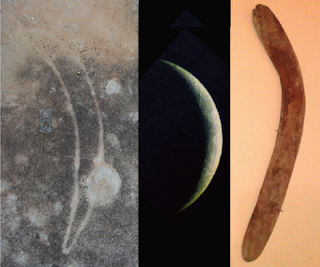 Figure 5: A crescent-shaped rock engraving from Calga Springs, NSW; the crescent Moon, and a Boomerang. Note the smooth curve and pointed ends of the engraving, as opposed to the relatively straight lines and rounded ends of the boomerang.
Eclipses
Several Aboriginal cultures recognised that eclipses are caused by a conjunction of the Sun and Moon. For example, in Arnhem Land a solar eclipse is caused by the Sun-woman being hidden by the Moon-man as they make love, while a lunar eclipse is caused when the Moon-man is pursued and caught by the Sun-woman.  Similarly, Daisy Bates reported that the solar eclipse of 1922 was said by the Wirangu people to be caused by the Sun and Moon "becoming husband and wife together".
These stories demonstrate a significant intellectual accomplishment. To understand a solar eclipse, in which the Moon comes between the Earth and the Sun, is impressive, but perhaps not surprising if traditional Aboriginal thinkers carefully studied the motion of the Sun and Moon. However, to understand a lunar eclipse, in which the Earth’s shadow extinguishes the Moon, requires a significant leap of understanding, since it occurs when the Sun and Moon are diametrically opposed in the sky, and it is precisely this alignment that causes the eclipse.
Amongst the crescent motifs found in the Sydney Rock Engravings are several examples that depict a man and woman under, or next to, a crescent shape. In the case of the Basin Track engraving (Figure 6), the sign erected by the National Parks and Wildlife Service explains that the engraving shows a man and woman with a boomerang. However, it is unclear why a man and woman should reach up towards a boomerang in the sky. The engraving makes more sense if, as suggested above, the crescent represents a Moon rather than a boomerang, but is still unusual in that the moon is shown with the two horns pointing down, a configuration normally seen only when the moon is barely visible in the early morning or late afternoon. But such a configuration can be seen during an eclipse, and this suggestion is supported by the two figures, one of which partially obscures the other. Such carefully drawn obscuration is unusual in these rock carvings, and in this case may represent the Moon-man obscuring the Sun-woman (or vice-versa) during an eclipse. Other circumstantial evidence for this hypothesis is that the man and woman face toward the northeastern horizon, in the direction a solar eclipse could be seen in the early morning. For example, such an eclipse, with the horns pointing downwards as depicted, took place on the morning of 8 August 1831.  John Clegg speculated that a hermaphrodite figure near this engraving may represent the moon-man and sun-woman fully superimposed during a total eclipse. 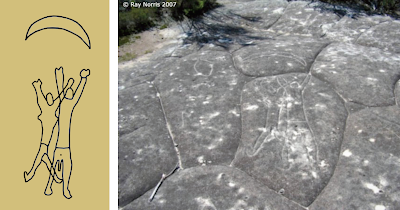 Figure 6: The “eclipse” engraving at the Basin Track, Ku-ring-gai Chase National Park, NSW.
The Emu in the Sky
Across the zenith of an Australian Autumn sky stretches the bright band of the Milky Way. Within it can be seen a number of dark patches and streaks, caused by clouds of interstellar dust in which new stars are being born. Perhaps the best-known Aboriginal constellation is the "Emu in the Sky", formed not of stars, but of the dark patches between them. Amongst the Sydney Rock Engravings, close to the Elvina Track, is a finely engraved emu (Figure 7), carefully drawn to show the gizzard and other anatomical features. On the other hand, its legs trail behind it, in a position that would be unnatural for a real emu, but is very similar to that of the Emu in the Sky. This was first noted by Hugh Cairns, who suggested the engraving might represent the Emu in the Sky rather than a real emu. This suggestion is further supported by the fact that the time of the year when the Emu in the Sky stands in the evening above her portrait, in the correct orientation, is the same time when real-life emus are laying their eggs. It seems quite possible that this engraving is a picture of the Emu in the Sky rather than a real emu. 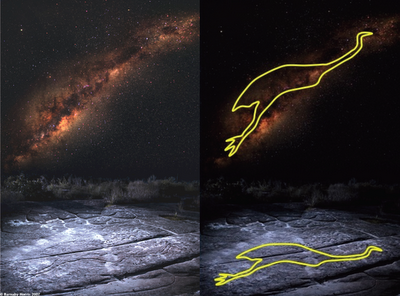 Figure 7: The “Emu in the Sky”, consisting of dark patches in the Milky Way, above the Emu engraving at Elvina track, Ku-ring-gai Chase National Park, NSW. Photo by Barnaby Norris (2007).
Astronomical Records
Figure 3 shows one of the engravings of the Sun and Moon at Ngaut Ngaut, providing clear evidence of an astronomical connection at this site. Close to this engraving are carved a series of dots and lines (Figure 8), which, according to the traditional Nganguraku owners, show the "cycles of the Moon". This oral tradition has been passed through generations from father to son, but since initiation ceremonies were banned (along with the Nganguraku language) by Christian missionaries over a hundred years ago, only this fragment of knowledge survives, and it is not known exactly what the symbols mean. Certainly the dots and lines resemble tally marks, and the site’s astronomical connection suggests that they may indeed represent astronomical records. However, we have so far failed to decode them. We plan to conduct further tests to search for evidence of astronomical periodicities in the marks.