"Bridging the Gap" through Australian Cultural Astronomy: Part I

By Duane Hamacher and Ray Norris

In January of this year, the International Society for Archaeoastronomy & Astronomy in Culture (ISAAC) held its 9th global conference, dubbed “Oxford IX”, in Lima, Peru.  This was a great chance to meet all of the top people in the field, network, share research ideas, collaborate, and a fantastic opportunity to present the latest research on Australian Cultural Astronomy to a global audience. Representing Aboriginal Astronomy were Dianne Johnson, who wrote the definitive book on the subject, Ray Norris (who was unable to attend) and Duane Hamacher.  Dianne and Duane gave talks on the first day, which were both very well received.  A paper was prepared for the conference proceedings, and is presented in this blog. Although this paper is far more “academic” in nature than our previous blog posts, it is still easily accessible to the general reader.  The first half of the paper is presented this week, while the second half will be presented next week, complete with a list of references. 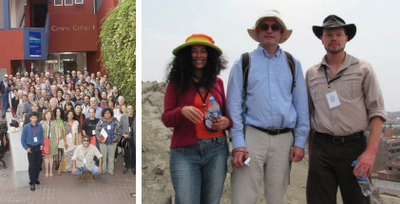 Left - Participants of the ISAAC conference in Lima, Peru.  Right - Gail Higginbottom (Flinders), Clive Ruggles (Leicester) and Duane Hamacher (Macquarie) at an archaeological site in Lima.
Abstract
For more than 50,000 years, Indigenous Australians have incorporated celestial events into their oral traditions and used the motions of celestial bodies for navigation, time-keeping, food economics, and social structure. In this paper, we explore the ways in which Aboriginal people made careful observations of the sky, measurements of celestial bodies, and incorporated astronomical events into complex oral traditions by searching for written records of time-keeping using celestial bodies, the use of rising and setting stars as indicators of special events, recorded observations of variable stars, the solar cycle, and lunar phases (including ocean tides and eclipses) in oral tradition, as well as astronomical measurements of the equinox, solstice, and cardinal points.
Introduction
An accumulation of evidence has shown that Aboriginal Australians were careful observers of the night sky and that celestial knowledge played a major role in the culture, social structure, and oral traditions of the hundreds of distinct Aboriginal groups, each with a distinct language and culture, that existed prior to British colonisation (e.g. Stanbridge, 1858; Griffin, 1923; Maegraith, 1932; Mountford, 1958; Clarke, 1997; Johnson, 1998; Haynes, 2000; Cairns & Harney, 2003; Fredrick, 2008; Norris & Norris, 2009; Norris & Hamacher, 2009), something Aboriginal people themselves have long known but is only beginning to receive long-overdue acknowledgement by mainstream Australians.  This knowledge included an understanding that celestial phenomena correlated to terrestrial events, such as the passage of time, the changing of seasons, the emergence of particular food sources, the timing of ocean tides, and the nature of transient celestial phenomena, such as comets, eclipses, meteors, and cosmic impacts (e.g. Hamacher & Norris 2009, 2010, 2011a, 2011b, Hamacher & Frew, 2010). Aboriginal people used the sky for marriage and totem classes and as cultural mnemonics (Johnson, 1998). This knowledge was passed through successive generations via oral tradition, dance, ceremony, and various artistic forms. Much of this knowledge was restricted to particular genders, totems, or was dependant on the initiation of that individual into the higher ranks of the community.
It has been claimed that Aboriginal people “made no measurements of space and time, nor did they engage in even the most elementary of mathematical calculations" (Haynes, 2000:54).  As recently as the 1980s, Blake (1981) stated that "no Australian Aboriginal language has a word for a number higher than four," despite well-documented Aboriginal number systems (e.g. McRoberts, 1990; Tully, 1997). If indeed Aboriginal people were incapable of counting past four, then it would seem unlikely that they "measured things" or observed celestial phenomena. Such misconceptions are an obstacle to research in this area.
While some Aboriginal groups were badly damaged by British colonisation, other communities, especially those in Arnhem Land, still live fairly "traditional" lifestyles, where the traditional language is spoken, and ceremonies, laws, and artistic forms are strong and vibrant. However, in other regions, evidence of once strong Aboriginal cultures is confined to historical accounts or archaeological sites, largely due to the damaging effects of colonisation.
In this paper, we highlight examples of how Aboriginal people made use of celestial phenomena for calendric, navigational, and cultural purposes and show that Aboriginal people were careful observers of the night sky. We show that they noted the changing brightness of particular stars, and the complex motions of the sun and moon, and oriented stone arrangements to cardinal directions, and to locations of astronomical phenomena.
Timekeeping & Written Records
There are a number of ways celestial objects can be used to record the passage of time.  In Aboriginal cultures, the moon is widely used. Hahn (1964:130) notes that Aboriginal people of the Hahndorf area in the Adelaide Hills were observed making notches in their digging sticks upon the appearance of each New Moon to mark their own age. Message sticks consist of pictograms used to communicate particular information to distant communities, which Howitt (1898:314) called "Blackfellow's letters". For example, Mathews (1897:293) explains how the pictograms on a message stick (Figure 1) represent information about the location and time of a corroboree to be held in the future. The message stick states that "Nanee (a) sent the message from the Bokhara river (b), by the hand of Imball (c), via the Birie (d), the Culgoa (e), and Cudnappa (f) rivers, to Belay (g); that the stick was dispatched at new moon (h), and Belay and his tribe are expected to be at Cudnappa river (f) at full moon (i); (j) represents a corroboree ground, and Belay understands from it that Nanee and his tribe are corroboreeing at the Bokhara river, which is their taorai, and, further, that on the meeting of the two tribes at full moon on the Cudnappa river a big corroboree will be held." 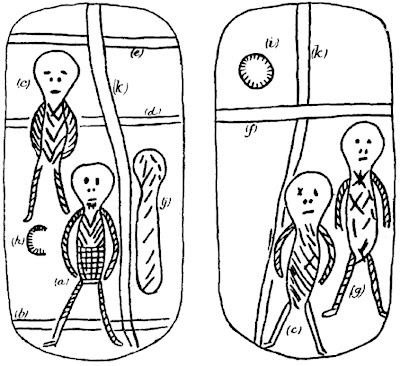 Figure 1: A message stick, taken from Mathews (1897:292), depicting information including time, denoted by the phase of the moon.
This particular message stick reveals pictograms representing the moon at different phases ("new" and "full"). The new moon, which in this context represents a crescent, is depicted in the lower-left of Frame 1, labeled as (h) while the full moon is the full circle depicted in the upper-left of Frame 2, labeled as (i). Given that the cusps of the moon point toward the right, this stick seems to represent a waxing crescent moon, which is prominent in the early evening. Lunar phases were a common method of determining time in message sticks (e.g. Howitt, 1898:317).
Seasons & Food Economics
Marking the change of seasons was essential to the Aboriginal hunter-gatherer societies of Australia, and the positions of celestial bodies were a good way to accomplish this (see Table 1 for examples). The change of seasons denoted altering weather patterns, the availability of particular food sources, and the breeding seasons of animals. The various climactic and geographic regions of Australia have led Aboriginal groups to designate a wide variety of seasons. In areas like northwest Victoria, Aboriginal groups had four distinct seasons (Stanbridge, 1858) while groups in Arnhem Land and many other areas had six (Thomson & Peterson, 1983), with substantial variation across the continent. In many communities, these seasonal changes are designated by the appearance of particular stars.
Table 1: Examples of the significance to different Aboriginal communities of the heliacal (morning) rising of particular stars.  We identify the star Parna as Fomalhaut, as it is the only bright star that rises in the eastern skies before sunrise in mid-March, the start of the Autumn Rains in the Adelaide region. 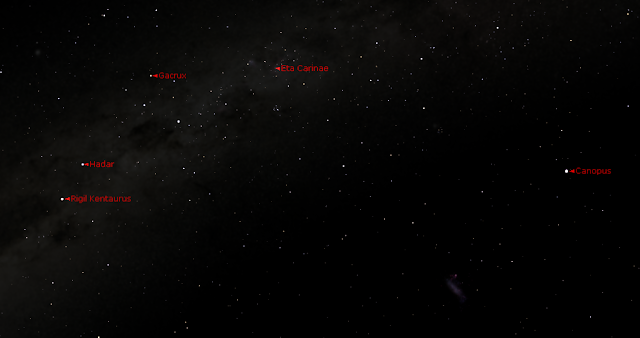 Figure 2: Eta Carinae and the surrounding region as it looks today, highlighting Canopus, Eta Carinae, Gacrux ("top" star of the Southern Cross), and Rigil Kentaurus and Hadar (the Pointers - Alpha and Beta Centauri)
There is also evidence that more subtle variable stars were noted by Aboriginal Australians. Daisy Bates from Ooldea, South Australia recorded that the local Aboriginal people had noted the variability of Betelgeuse in Orion (Fredrick, 2008). According to an oral tradition, the stars that constitute Orion represent Nyeeruna, a hunter of women who chases the women of the Pleiades (Yugarilya). Nyeeruna's right hand is represented by the star Betelgeuse (Alpha Orionis), which holds a club he endeavors to fill with fire-magic to hurl at Kambugudha, the eldest sister of the Yugarilya (represented by the V-shape of the brighter stars of the Hyades in Taurus), who prevents Nyeeruna from ever reaching the Yugarilya, thus humiliating him. In his rage, Nyeeruna reddens with fire and lust, but Kambugudha's magic and humiliation causes his fire magic to die out, becoming faint.
After some time, his magic comes back and his brightness increases. Betelgeuse is a red super-giant star with noted semi-regular variability that ranges between 1.2 < Vmag < 0.2 with a mean magnitude of 0.42 (Figure 3). These variations, first described by Herschel (1849), have a duration of several months to a year. 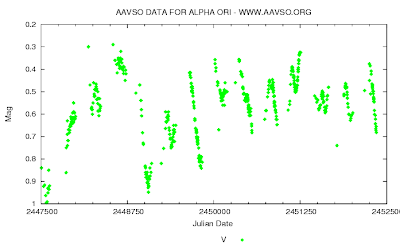