by Duane Hamacher and Ray Norris

We continue our discussion from last week...

Dynamics of the Earth-Moon-Sun System
In most Aboriginal cultures, the moon is male and the sun is female (e.g. Haynes, 2000; Johnson, 1998; Fredrick, 2008; Norris & Hamacher, 2009), although this is not universal (e.g. Meyer, 1846:11-12). Some of the accounts describe the sun-woman as an aggressive lover that chases the moon-man, who avoids her advances by zig-zagging across his path in the sky. This is an explanation of how the relative positions of the sun and moon change throughout the lunar month, where the moon can appear to the north, south, or in the same line as the sun. The Yolngu have a tradition that on rare occasions, the sun-woman (Walu) manages to capture the moon-man (Ngalindi) and consummates their relationship before he manages to escape, explaining a solar eclipse (Warner, 1937:538). A similar Dreaming from the Euahlayi of New South Wales says the sun-woman (Yhi) eclipsed the moon-man (Bahloo) in a jealous rage because he constantly avoided her advances. Bahloo is saved by the intervention of celestial spirits (Parker, 1905:139-140; Reed, 1965:130). A sexual encounter between the sun and moon as the cause of a solar eclipse is also found among the Wirangu of South Australia (Bates, 1944:211). Other Aboriginal groups deduced that something covered the sun during an eclipse, although it was not always identified with the moon (see Hamacher & Norris, 2011c).
Many oral traditions explain lunar phases in a cultural context. For example, the full moon is a fat, lazy man called Ngalindi to the Yolngu of Arnhem Land. His wives punish his laziness by chopping off bits of him with their axes, causing the waning moon. He manages to escape by climbing a tall tree to follow the Sun, but is mortally wounded, and dies. After remaining dead for three days (new moon), he rises again, growing fat and round (waxing moon), until his wives attack him again in a cycle that repeats to this day (Wells, 1964; Hulley, 1996). To coastal communities, the relationship between lunar phases and tides is well known. According to the Yolngu and the Anindilyakwa (Mountford, 1956), when the tides are high, the water fills the moon as it rises at dusk (full moon). As the tides drop, the moon empties (crescent) until the moon is high in the sky during dusk or dawn, at which time the tides fall and the moon runs out of water (first and last quarter). The moon begins to fill again when it rises at dawn (new moon).
These accounts show that Aboriginal people paid careful attention to the motions of the sun and moon, explaining the mechanics of an eclipse and the relationship between lunar phases and ocean tides.
Astronomical Measurements
The goal of this study is to determine whether Aboriginal people made astronomical observations and measurements. Here, we discuss two examples from the archaeological record. Wurdi Youang is an egg-shaped stone arrangement in Victoria, which was built by the Wathaurung people before European settlement. The stone arrangement is about 50 m in diameter with the major axis lying almost exactly East-West. At its Western apex are three prominent waist-high stones. Morieson (2003) pointed out that outlying stones to the West of the circle, as viewed from these three stones, indicate the setting positions of the sun at the equinoxes and solstices. Norris et al (2011) have confirmed these alignments and have also shown that the straight sides of the circle also indicate the solstices and the three stones as viewed from the Eastern apex, define the setting sun at equinox (Figure 1). This arrangement, if intended for this purpose, would have required careful observations of the sun throughout the year. The age and exact purpose of this arrangement are unknown, but the two independent lines of evidence for solar indications support an astronomical relationship.  Read more here. 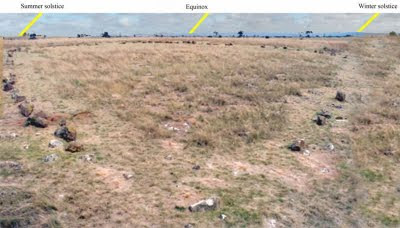 Figure 1: The Wurdi Youang stone arrangement in Victoria.  The stone arrangement aligns with the solstices and equinox.  Image taken from the Australian Aboriginal Astronomy Project website.
Aboriginal stone arrangements in New South Wales have a variety of uses, including ceremonial and practical (e.g. McBryde, 1974; Bowdler, 1983; Attenbrow, 2002). We present preliminary results of a cardinal alignment survey of stone arrangements in New South Wales. We survey stone rows, pairs of stone circles/cairns (where the azimuth is measured from the centre of each circle or cairn), or single stone circles with an entrance and exit (Figure 2). 660 archaeological site cards were obtained from NSW Heritage, of which some contain a detailed archaeological survey. We set selection criteria for determining the azimuth of these arrangements, using the site cards alone as an initial test.  We then measured the azimuths (labeling North as 0 deg, East as 90 deg, etc.) of each arrangement using these predetermined criteria, being careful not to bias the selection in favour of cardinal points. Of the 660 site cards, we rejected 600 as either being ambiguous, having insufficient data, or being off-limits for cultural reasons. From the 60 remaining sites, we obtained 134 orientations, although the site cards did not always specify whether the orientation was true or magnetic North. However a preliminary analysis of the site card data shows (Figure 3) a clear, statistically unambiguous preference toward cardinal directions. 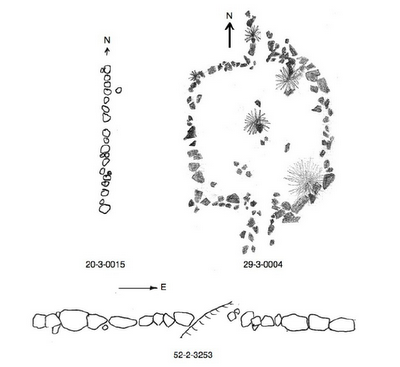 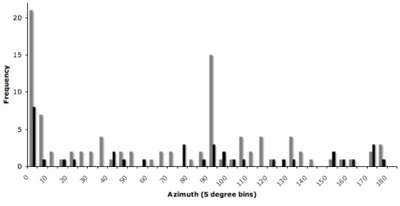