I must apologise to our readers for the lack of consistent posts this month.  A lot has been going on and the status of the project is now at an exciting point.  I am also in the final stages of writing up my doctoral thesis on Aboriginal Astronomy, which I plan to submit in just a few weeks.  This is one of the main reasons posts have been a bit erratic this month :-)
The panel session on Indigenous Astronomy at the ACMI film exhibition in Melbourne last week was a success, although only myself and one other panelist were able to make it (mostly due to the Qantas strikes).  We had a great session and the audio will be released as a podcast soon.  Read a blog about the event from Nick Lomb of Sydney Observatory.

We are finishing new research papers with exciting results, which we will submit to journals in the next month or so.  Future blog posts will focus on this emerging research.
We have been contacted by a donor through a community foundation that wishes to present us with a VERY healthy research grant!  This is fantastic news and ensures that top-quality research and outreach on Aboriginal Astronomy will continue.  Funding is always a scarce commodity and much of the time we could be using for research we spend looking for new sources of funding, so generous grants like this are an amazing benefit all around.  If anyone else is interested in donating to our project, feel free to contact me... your donation will be well utilised! (Contact details are on the right sidebar labeled "Contact").
And finally, Macquarie University has recently purchased a new state-of-the-art mobile planetarium, which is absolutely amazing.  We are hoping to be able to take the planetarium to Indigenous communities as an outreach tool for sharing both Western and Aboriginal astronomy.  More to come!
Cheers,
Duane Hamacher
Posted by Indigenous Astronomy Blog at 2:45 PM No comments:

The Australian Centre for the Moving Image (ACMI) in Melbourne presents the world premiere of 'Star Voyager: Exploring Space on Screen', a major exhibition charting the history and future of space exploration as experienced through the moving image.

From early films by Fritz Lang and Georges Méliès, through to footage of the 1969 moon landing and recent films such as the Alien series, Moon and Sunshine, the moving image has allowed us to experience what most of us can only dream of.

Combining scientific and documentary footage with feature films and video artwork, the Star Voyager exhibition celebrates an enduring fascination with space travel through the imaginations of artists, scientists and astronauts.

Between the twinkling of the stars and the majesty of the planets, space has long held fascination for human kind. It has been a canvas for mythical storytelling and a sandpit for scientific research.

To celebrate the opening of Star Voyager, this forum will explore our fascination with space from two distinct angles - through the eyes of Indigenous Australians and the way that art and science have come together to create a new vision of space.

Be guided through the intricacies of Indigenous astronomy with

This week, I present the small booklet written by Ray and Cilla Norris and a poster developed by their son Barnaby. Ray is the Director of the Aboriginal Astronomy Project.

Their research included:
This book is an easy-to-read introduction to what we know about Aboriginal Astronomy and the current state of research into this area.

Each of the 400 different Aboriginal cultures in Australia has a distinct language, oral tradition, ceremonies, and art forms, some of which have a strong astronomical component. Many share common traditions such as the “emu in the sky” constellation of dark clouds, and stories about the Sun, Moon, Orion, and the Pleiades. Several use the rising and setting of particular stars to indicate the time to harvest a food source, and some link the Sun and Moon to tides, and even explain eclipses as a conjunction of the Sun and Moon.

These traditions reveal a depth and complexity of Aboriginal cultures which are not widely appreciated by outsiders. This book explores several wonderful Aboriginal astronomical stories and traditions, and the way in which these are used for practical applications such as navigation and harvesting. It also describes the journey of exploration which is opening Western eyes to this treasury of ancient Aboriginal knowledge. 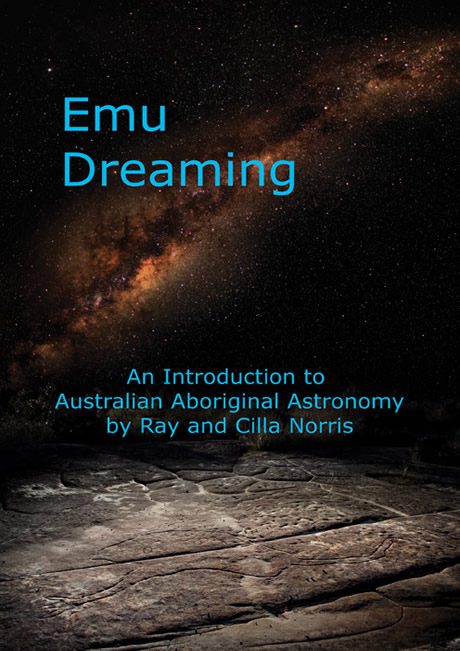 The cover photo is the famous Emu in the Sky by Barnaby Norris, which is also available as a full colour poster. This superb high-resolution poster printed on heavyweight (250 gsm) art-quality paper shows the Aboriginal "emu-in-the-sky" constellation, standing above the emu engraving in Kurung-Gai Chase National Park.

Many Aboriginal groups have stories about the “Coalsack” - the famous dark cloud next to the Southern Cross. Some see it as the head of a lawman, or a possum in a tree, but many groups tell stories of a great emu whose head is the Coalsack, and whose neck, body, and legs are formed from dust lanes stretching across the Milky Way. It’s easy to make out the emu in a dark autumn sky, and once you’ve seen it, the Milky Way will never look the same again.

Below it is the emu engraving, one of thousands of finely constructed engravings drawn by the Guringai people hundreds of years ago, and still visible in Ku-ring-gai Chase National Park, north of Sydney. Sadly, the Guringai people vanished soon after the arrival of the British in 1788.

Photographing these engravings is tricky. The grooves are shallow and frequently obscured by natural undulations in the rock. Received wisdom is to photograph them at sunrise or sunset, when the low angle of the Sun outlines the grooves with shadows. But we can’t always wait for sunset, and even then the resulting photo is likely to be marred by shadows of nearby trees.Instead, Barnaby and Ray decided to replace the Sun by a 1000 Joule studio flash (emitting something like 1MW of light), together with batteries and an inverter for use at remote sites. This low-angle flash technique took care of the engraving, but what about the sky?

Since the night sky in the National Park is now spoiled by the streetlights of nearby Sydney, they decided to photograph it from Siding Spring Mountain, near Coonabarabran. A further challenge is that the emu stretches half-way across the sky, so doesn’t fit in the field of view of a normal lens. A fish-eye lens on an equatorial mount would do the trick, but would distort the image, preventing a realistic comparison with the engraving. So instead they made a mosaic of smaller images that could be stitched together in software. Furthermore, by taking a series of short exposure images, they wouldn’t need an equatorial drive, as they could correct for sky rotation in software. Having taken the photos, Barnaby spent two months stitching the hundreds of images together, working out how to correct for the distortions and sky rotation while keeping the shape true to the projection seen by the human eye from the engraving site. The result was magnificent (see below) and in August 2007 won Barnaby a $2000 prize in the New Scientist Eureka science prizes. 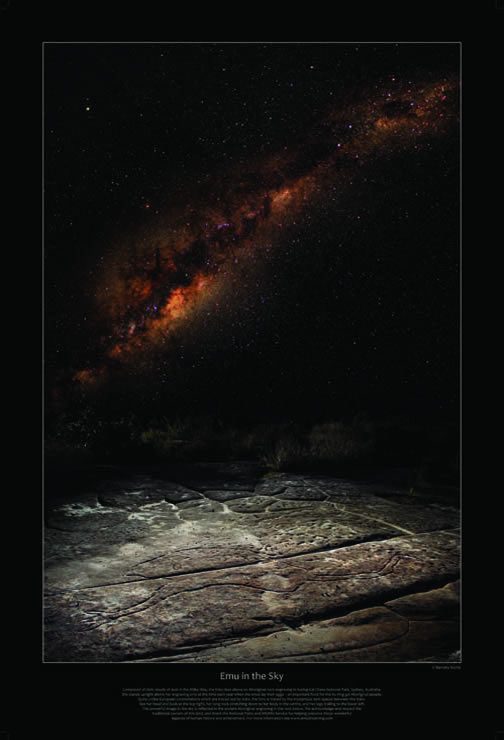 Poster Caption: Composed of dark clouds of dust in the Milky Way, the Emu rises above an Aboriginal rock-engraving in Kuring-Gai Chase National Park, Sydney, Australia. She stands upright above her engraving only at the time each year when the emus lay their eggs – an important food for the Ku-ring-gai Aboriginal people. Quite unlike European constellations which are traced out by stars, the Emu is traced by the mysterious dark spaces between the stars. See her head and beak at the top right, her long neck stretching down to her body in the centre, and her legs trailing to the lower left. This powerful image in the sky is reflected in the ancient Aboriginal engraving in the rock below. We acknowledge and respect the traditional owners of this land, and thank the National Parks and Wildlife Service for helping preserve these wonderful legacies of human history and achievement.

All proceeds from these sales support research on Aboriginal Astronomy.

Ray Norris is an astrophysicist at CSIRO Astronomy & Space Science. Born in England, he obtained an MA in theoretical physics at Cambridge, followed by a PhD and postdoc in radio-astronomy at Manchester, while also studying the astronomy of ancient standing stones. In 1983, Ray and his family moved to Australia where he joined the CSIRO, and now researches the formation and evolution of the first galaxies in the Universe, and also the astronomy of Aboriginal Australians. He was appointed as an Adjunct Professor at the Macquarie University Department of Indigenous Studies in 2008.

Cilla Norris has worked as an artist, high school teacher, veterinary nurse, wildlife sanctuary guide, and wild-life carer for 30 years. As well as working with her husband Ray on Aboriginal Astronomy, she is known as an authority on the care and rehabilitation of possums, and writes and teaches about possums to the NSW Wildlife Information and Rescue Service (WIRES) and other groups.

Barnaby Norris is a PhD candidate in astrophysics at the University of Sydney. He also has an arts degree and worked on a number of short films, music videos, and commercials, either as Director or Cinematographer. The short film Snow, for which he was Director of Photography, was one of 11 international short films, selected from thousands submitted, featured at the Cannes film festival in 2006.

*Editor's Note: For those that have wondered, we will never use this blog for profit. As we have garnered over 14,000 hits in the last six months, Blogger is constantly pressing us to "monetize". It defeats the purpose and it's extremely annoying to be reading a blog while bombarded with adverts. All proceeds from these book and poster sales go directly to funding research in Aboriginal Astronomy, much of which comes directly out-of-pocket by the researchers themselves.

Posted by Indigenous Astronomy Blog at 9:32 AM No comments: