This week I want to bring something a little different to your attention.  Professor Ray Norris, the director of the Aboriginal Astronomy Project, has written and published a novel entitled Graven Images.
After just a few short months, Graven Images climbed to the Amazon top 100,000 Best Seller list!
-----------------------
About Graven Images
2005 - the year of the London tube bombings. Within the gentle ranks of the Pagan movement lurks a sinister group that uses scaremongering and terrorism to restore witchcraft as Britain’s primary religion. A young Cambridge biologist, Owen, penetrates their cabal while seeking to avenge the death of his archaeologist girlfriend, whom he believes was killed to halt her research into Bronze-Age stone circles. Owen dismisses beliefs in Wicca and witchcraft as superstition, but applies his scientific reasoning to decode ancient legends, and discovers a secret that will transform modern religion. After being drawn into a terrorist plot, he finds himself sliding helplessly from respected academic to hunted criminal, out of his depth in lies and intrigue.
Graven Images draws connections between the byways of historical fact, University politics, and contemporary culture. It's a provocative adventure whose nail-biting tension is lightened by moments of comedy, leaving you wondering how much of this is really fiction. 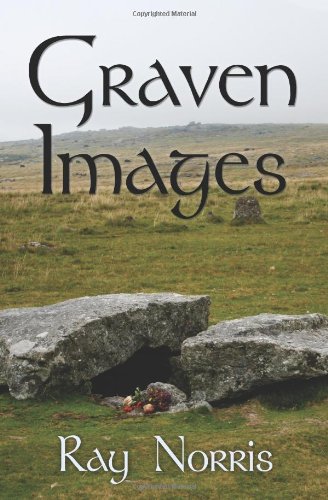 -----------------------
This is the first novel from Ray Norris.  Ray is an astrophysicist at the CSIRO whose day-job is to find out how the Universe evolved from the Big Bang to the present day.  He also researches Australian Aboriginal astronomy and the astronomy of British Bronze-age stone circles.

To research this novel, Ray learnt from modern-day Wiccans, connecting their beliefs to his knowledge of ancient astronomy, encapsulated in the stone circles and megaliths of Britain.  An atheist himself, but fascinated by other people's beliefs, he was amazed to find how this ancient pagan religion is still deeply but secretly engrained across the strata of modern British society.

As well as over 250 professional publications, Ray frequently appears on radio and TV and performs in a stage show called "The First Astronomers". For relaxation, he walks the moors of Dartmoor and the Australian bush, and writes.
Click here for a preview of Graven Images.

Learn more about Ray, the Novel, and the science behind the story at the Graven Images Homepage.

Reviews of Graven Images
"It's a beautiful plot, and I loved the main character, Owen... sigh... Its one of those rare books that sometimes gets you on the edge of your seat, sometimes leaves you teary, and other times moments of humor which make you laugh out loud."

"Brilliant book! I got totally caught up in it and couldn’t put it down. It really keeps you on the edge of your seat. Also it has a lot about Wicca and the Museum in it.  What I really liked was the stuff about the links between Wicca and very early British paganism - it gets you wondering! Can’t say more or I'll spoil it for you if you haven’t read it! Totally recommend it for Wiccans and non-Wiccans."
"I got completely immersed into the plot of this story. The characters are so authentic (I am a scientist myself) and the story is so well defined that I could not stop reading! Great mixture of science, history, religions, traditions, and most of all, the deepest human emotions. A "must read" fully recommended."
"Norris combines historical facts, his experiences as an academic, and the summers he spent surveying stone circles across Britain to write an engrossing, emotive story about the life-changing events of a young academic and his emotional quest for revenge and justice. Graven Images is a fantastic read with a great story-line, well-developed characters, and a few surprising twists. Highly recommended!"
Posted by Indigenous Astronomy Blog at 10:36 AM