by Paul Curnow (BEd)
...continued from last week.
Our magnificent southern night skies feature two misty white patches known as the Magellanic Clouds. The Magellanic Clouds (below) are two satellite galaxies orbiting our own and the light from these two irregular shaped galaxies can be seen naked eye under dark skies. These misty white patches first came to the attention of Europeans when the Portuguese explorer Ferdinand Magellan recorded them during his journey south in 1519. The Large Magellanic Cloud, which contains around 10,000 million stars, lies approximately 170,000 light years away and the Small Magellanic Cloud lies approximately 230,000 light years away.

As recorded by Tunbridge (1988), the Adnyamathanha call the Magellanic Clouds Vutha Varkla and they are seen as two male lawmen also known as the Vaalnapa.  In Aboriginal society, strict marriage laws are observed and most groups within Australia are divided into two ‘moieties’.  For example, Adnyamathanha society is divided into the Mathari and Arraru moieties. This means that if you are a Mathari person that you are not permitted to marry another Mathari person. Also, if you are an Arraru person you cannot marry another Arraru individual. Therefore, in Adnyamathanha society you must marry someone of the opposite moiety.
Consequently, the Adnyamathanha speak about the two Vaalnapa, or ‘two lawmen’ (below).  These ‘two mates’, the Vaalnapa, had created a fire and are believed to have travelled up into the heavens on the sparks coming from this fire in order to watch over the people and now appear as the two Magellanic Clouds. Furthermore, where some of the sparks from their fire came down to the ground this was an explanation of how gold deposits were formed and where the ashes came to rest on the ground this is believed to have formed lead. 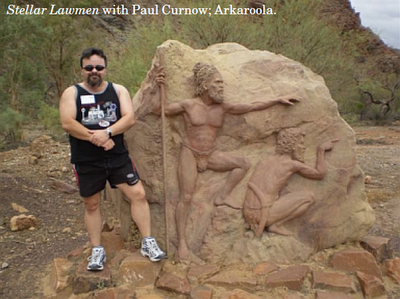 In addition to appearing as the two clouds of Magellan, the lawmen appear as various topographical features in the Flinders Ranges and are also believed to be responsible for the creation of some of these magnificent geographical features. Thus, even to this day, the ‘two lawmen’ still gaze over the Adnyamathana Nation as they have done for aeons assuring that marriage laws are still adhered to.
Interestingly, when missionaries first ventured to the lands of the Adnyamathanha in the hope of converting them to the Christian faith in the 1800’s they told the Adnyamathanha that if they were bad that ‘god’ resided in the sky and that they could be punished. To which the Adnyamathanha would reply, “Yes we know there are two of them,” referring to the two lawmen watching over them.
Additionally, like many early cultures across our vast planet the open star cluster the Pleiades is seen as a group of maidens. As recorded by Mountford (1939), the Pleiades are known to the Adnyamathanha Peoples as the Makara, and are seen a group of marsupial-like women with pouches.  These marsupial women are viewed as a group of ‘ice maidens’ for as the Pleiades make their first appearance before the sun (heliacal rising) and slowly journey across the sky, it is believed that their pouches are filled with ice crystals.
These ice crystals fall from the pouches of the Makara and also stream from their eyes and ears as they travel and the result is the morning frost being spread across the ground. When this takes place the younger members of the group rub these ice crystals on their bodies. It is believed that this will enable the males to grow long beards and become strong, and that the young females will become healthy and fertile. This also coincides with the Wundukara releasing their long beards down from the sky to the surface of the Earth.
The Adnyamathanha also believe that the region is home to the giant serpent Akurra. It is believed that the serpent (or sometimes serpents) formed many of the topographical features of the ranges. For example, it is believed that the Akurra drank all the water from Lake Frome. In fact, the Akurra drank so much water from Lake Frome that his stomach became very swollen and as he crawled up through the creeks he formed all the gullies with his swollen body. 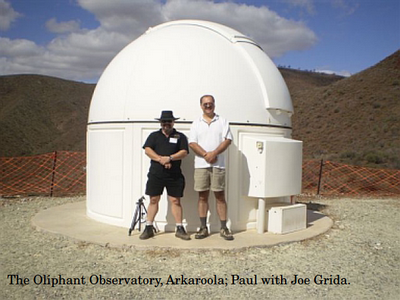 As recorded by Tunbridge (1988), there is another story that relates to the Pleiades. The Pleiades were also known as Artunyi a group of maidens. One of the giant serpents had swallowed up the Artunyi, however, shortly after there came a great flood and the Akurra died. The floodwaters grew higher and higher and slowly reached up to the sky above. The body of the serpent was floating on top of the water and had become swollen as the body decayed. Eventually, the water became so high it nearly touched the sky and the decaying body of the Akurra burst open flinging the Artunyi into the sky where they remain to this day.
To conclude, the boastful hunter in the sky Orion was known as the Miaridtja to the Adnyamathanha. The Miaridtja is a group of men returning to camp after a day’s hunting. The Pleiades set before the stars of Orion and it is believed that the Makara travel below the horizon before the Miaridtja to prepare a fire in order to cook the food that the men will bring back to camp. It is worth noting that the Kaurna who come from the Adelaide Plains of South Australia and the Boorong of north western Victoria also see the stars of Orion as a group of men.
References
Bakich, M. (1995).  The Cambridge Guide to the Constellations, Cambridge University Press.
Cawood, M. & Langford, M. (2000).  The Australian Geographic Glove Box Guide to the Flinders Ranges, Australian Geographic Pty Ltd: Terrey Hills, NSW.
Mountford, C.P. (1939).  Anyamatana Legend of the Pleiades, Victorian Naturalist: Melbourne.
Pring, A. (2002).  Astronomy and Australian Indigenous People (draft), DETE: Adelaide.
Ridpath, I. & Tirion, W. (2000).  Collins Guide to the Stars and Planets 3rd Edition, Collins: Glasgow.
Tunbridge, D. (1988).  Flinders Ranges Dreaming, Aboriginal Studies Press: Canberra.
Warrior, F.; Pring, A.; Knight, F. & Anderson, S. (2005).  Ngadjuri: Aboriginal People of the Mid North Region of South Australia, SASOSE Council Inc: Adelaide. URL

----------
This blog was originally published as Adnyamathanha Night Skies, Bulletin of the Astronomical Society of South Australia, June Issue, 2009 , pp. 12-14 by Paul Curnow.
Posted by Indigenous Astronomy Blog at 3:14 PM